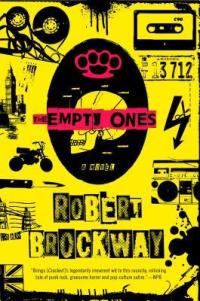 The Empty Ones by Robert Brockway

It is difficult to find sequels that are better than the original.  Sure, a few are out there, but those are the exception to the rule — at least, in my opinion.  But, now, I am happy to have uncovered one of those rare sequels in The Empty Ones, because Robert Brockway has delivered a follow-up to The Unnoticeables that delivers a swift kick to reader’s proverbial asses — but only in the best of ways.

Picking up shortly after the conclusion of book one, the tale again follows along behind foul-mouthed, punk Carey in New York City circa 1978 and kick-ass stunt woman Kaitlyn in 2013 California.  The narrative seamlessly switching back and forth between these characters and their different time periods, as both our protagonists take serious road trips.

After surviving his encounters with the world of the Tar Men, Unnoticeables, Empty Ones, and sibilant angels, Carey is a wiser punk but a pissed off one: the deaths of more than a few of his friends the cause of his venom.  And, now, he has decided to head on over to London, England to take in the punk music scene, while he also hunts down the Empty One responsible for 1977 sucking so much and painfully kills it.

Meanwhile, decades away, Kaitlyn hits the road for a similar reason: to kill former teen heartthrob Marco.  Not because she is upset he got old and out of shape.  Not because he won’t take photos with fans anymore.  Not because he is a terrible actor.  But because he just happens to be a soulless, psychopathic creature in need of a quick death.  The fact that Kaitlyn and her friends continue to be hounded by his unearthly monsters giving her the encouragement necessary to strike out across the American Southwest for Mexico, where Marco is filming a new show on location and where he will soon die for real!

My favorite thing about The Unnoticeables was Mr. Brockway’s blending of genres.  There were dark laughs, sarcastic humor, maniacal mystery, ample gore, fantastical creatures, and pure action.  No matter your tastes, there was something in that book for everyone.  Well, The Empty Ones not only duplicates that amazing feat it exceeds it, adding even more humor, more gore, more . . . you get the idea.  The book is just really good, bro.  Just sayin.

If I had to point out the greatest strength of The Empty Ones, then I would have to say the evolution of the characters.  No, Carey and Kaitlyn are not totally different people here, but they have evolved.  Carey is still a smart ass, girl chasing punk who is as happy chasing down his next beer, his next woman, and his next tickets to a Ramone concert as he is fighting off other dimensional angels and their horrifying minions.  And Kaitlyn is still a tough minded, smart woman who is willing to face down her greatest fears and stare certain death directly in the eyes to keep others safe from unspeakable things like Marco the soulless nihilist.  But now these two have grown up from book to book; the situations they survived changing them subtly into more mature, less naive people than they were before.

And if that alone isn’t enough of a selling point for you, then let me mention the ever widening mythos of our creepy villains.  The Tar Men, Unnoticeables, Empty Ones, and angles slowly being developed by Mr. Brockway into epic antagonists.  The creepy creatures even getting their own point-of-view chapters.  The more that is revealed about them the more interesting these horrid and heartless monsters become, especially mortifying how they drift invisibly through human society with a purpose more insidious than anyone could ever realize.

As for criticisms, I don’t have any to speak of.  Going into this read, I knew exactly what I wanted out of this second installment of the Vicious Circuit, and Mr. Brockway met and exceeded my expectations in every way.  So, for once, I cannot bitch about anything.  I know everyone is glad to see me type that.

If I haven’t already made it abundantly clear, The Empty Ones is a great sequel, worthy of a read by all fans of genre blending stories filled with violence and graphic humor.  Obviously, you would enjoy this novel better if you have already devoured The Unnoticeables, but you can get by without having read it if you’d prefer: Mr. Brockway summarizing prior events succinctly and very clearly.  So go pick this one up and have some horrifying fun!

5 Responses to THE EMPTY ONES