Posted on September 8, 2016 by Bookwraiths 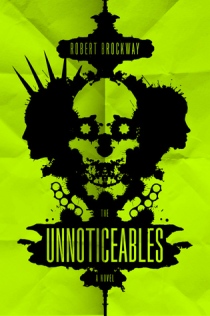 The Unnoticeables by Robert Brockway

Part horror, part fantasy, part sci-fi, and one hundred percent entertaining, The Unnoticeables is a punk rock opus, where the creepy, the graphic, and the humorous come together to create something ever so delectable. Robert Brockway’s delicious tale of the paranormal doing its very best to encourage you to come unhinged – but only in the very best of ways.

Three different points of view drive this story. In New York City’s punk rock scene of 1977, Carey is a young punk, happy to chase after his next girl and his next beer all day long. But things change when he witnesses a “Tar Man” up close. This urban legend coming to life before his eyes; the unbelievable rumors of these weird creatures kidnaping and killing people suddenly not complete garbage anymore. And when these damn things begin coming after his friends, Carey decides to do what he does best: be a royal pain in the ass.

Meanwhile, in Los Angeles, California circa 2013, Kaitlyn is a young woman trying to become a stunt woman in a city filled with wannabe actors. Other than her career going nowhere, she can’t complain about her current situation too much (though a tragic incident from the past does still haunt her). That is until one night at a Hollywood party she bums a ride home off Marco, a former teen heartthrob, whom she once had an adolescent crush on. This person revealing himself to be something inhuman, terrifying Kaitlyn to the core, and causing her to instantly fear for her best friend who does not return home from the same party.

The third point of view is a mysterious person. Unnamed at the beginning. Unidentified until much later. The brief interludes with this individual providing context to the creepy entities both Carey and Kaitlyn find themselves facing, bridging both the distance and the gulf of time between 1977 NYC and 2013 LA.

What Mr. Brockway has accomplished with The Unnoticeables is difficult to articulate. Honestly, going into my read, I was expecting a gory urban fantasy, a punk rock horror-fest, a quirky paranormal adventure, or some combination thereof; all entertaining options to be sure. Instead, I found myself reading a genre blending piece of literature which made me laugh at punk pals trying to pull girls, sneer at the eye rolling idiocy of Hollywood, be shocked by unexpected Tar Men, watch in horror as I learned about Empty Ones, and cringe in shock at the gore and nihilistic plans for humanity. The shortness of the novel allowing me to rush from one emotion to another without a break, mimicking the emotional surges of a fast paced, adrenaline filled theatrical presentation.

A great deal of my fondness for this story is tied to the lead characters. Carey is exactly the type of smart-ass punk I always find myself cheering for, and Kaitlyn’s spirited stunt woman persona was a great balance to her belligerent co-star and a great viewpoint to witness the City of Angels really turning into a “city of angels of death.” The constant back and forth structure of the narrative allowing me to enjoy each of these very different people handling eerily similar problems without ever growing tired of either.

If our protagonists brought The Unnoticeables to life the creepy Tar Men, Empty Ones, and other inhuman denizens were the driving force of this bizarre, mind-bending trip into the land of angels, demons, and worthless humanity. The unseen and unrecognizable entities terrifying in their gradual introduction, mesmerizing in their growing mythos, and borderline horrifying in their nightmarish purposes. Mr. Brockway handling these unearthly denizens with an unerring hand, nailing their portrayal and developing them into antagonists many readers will find it hard to forget.

I really enjoyed this introduction to Robert Brockway’s writing and the Vicious Circuit series. Definitely an author I want to read more from in the future . . . which is great, considering I’m currently finishing off the next book two, The Empty Ones!