Posted on January 2, 2018 by Bookwraiths

As always, this list is my end-of-the-year effort to look back on all the books I’ve read, give a little more love to my favorites, and, hopefully, help someone discover a great story they missed out on.  So let’s get right to it!

The Ten Thousand is a grimdark fantasy penned by Paul Kearney. Inspired by the historical journey of ten thousand Greek warriors in the Persian Empire circa 401 BC, this tale is a gritty, bloody, and brutal look at the realities of ancient war (especially civil war) and its undeniable horrors. With more than a few fantastical elements added, Kearney turns this into far more than historical fiction, but magic does not play as large a role in the narrative as some would like. However, if realistic and unabashed looks at ancient warfare and its consequences are what you love, then this is a can’t-miss grimdark.

The Nine is a genre blending work from Tracy Townsend that isn’t afraid to blaze its own trail in fantasy, mixing and matching the most exciting elements from other genres into something new, something all its own. In this alternate universe, religion is science and God is worshiped as a being who created the cosmos as the ultimate scientific experiment. The focus of this divine study “The Nine.” Nine beings whom God has chosen at random to observes as they deal with life’s inevitable struggles; their actions to determine the final fate of all of humanity!

Anna Smith Spark has gifted readers with a gritty, glorious grimdark fantasy which is beautifully written, filled with gray characters, betrayals, gory battles, horrible deaths, perplexing gods, and everything else a lover of dark, brutal narratives could wish for.  Due to the poetic prose, persuasive darkness, Game of Thrones-esque complexity, and gory brutality, readers have begun to call the author the Queen of Grimdark, which I personally believe is a moniker she has certainly earned with this amazing debut.

Purchase The Court of Broken Knives

A noir crime story set in a fantasy setting Low Town is a dark tale of drug dealers, realistic politics, corrupt cops, and vile sorcery set in the ugly, dirty, and crime infested section of the finest city in the Thirteen Lands, Low Town: a place few willing call home. It is here the Warden resides, using his cynical, streetwise, and violent skills to rule this slum as a crime lord. His days spent dealing drugs; his nights filled with turf wars for control; and the profits he makes from the drugs he deals paying off the guards to look the other way and setting him up in a bearable life.

The Farlander series was a memorable discovery of mine in 2017, one which intrigued me with its first installment but really sunk its claws in deep with this sequel.  With Stands a Shadow, Col Buchanan picks up the story directly after the events from book one, sending our main character on an epic journey of revenge, as well as adding more than one new point of view character to take the tale in unexpected for directions.  It was a page-turner from start to finish.

Lucifer’s Star is damn fine space opera! This is the tale of Cassius, a loner aboard the star frigate Melampus; his mind plagued by nightmares of the war he somehow survived years before. His only desire to slip away from that past, forget what he has lost, and fade into obscurity among the other rift raft aboard Captain Ida Claire’s starship.  From this beginning, Phipps and Suttkus craft a rousing, pulse-pounding adventure story that fans of Star Wars, Battlestar Galactica, or other sci-fi series should not miss out on.

I’ve come to the realization that Michael Fletcher is among my favorite writers. Whether it is the fantasy insanity of Beyond Redemption or this cyberpunk vision of the future, he finds the perfect balance between madness and sentiment, poignance and action to keep me turning the pages. Honestly, the guy never writes a bad story, and in Ghosts of Tomorrow, his  skill is on full display, as he populates a future world with a supercharged internet, superpowered computers, and near superhuman robots mixed up in an action adventure for the ages! 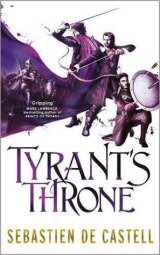 Few series transcend their genre, bring readers of differing tastes together to brave dangers along behind its heroes. But when one does, this saga finds itself held up as an all-time great; descriptive terms such as the matchless, the peerless, the unparalleled pinnacle of the genre, and other even more flowery terms thrown around.  Sebastien de Castell’s Greatcoats series is among that small, heralded group of fantasy sagas for me personally. Tyrant’s Throne delivering the finishing touches to propel it into the best swashbuckling fantasy ever written; Falcio val Mond and comrades able to proudly parade among the elites of the genre. 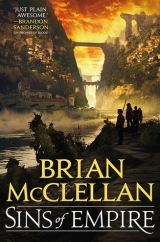 With a fast paced narrative, compelling characters, a cool magic system, a diverse world and an epic conclusion, Sins of Empire is a flintlock fantasy completed to perfection. This novel showcasing the silky smooth talent of Brian McClellan in crafting an epic fantasy which long time fans and new comers can both enjoy and love. Without a doubt, it was my front-runner for Best Fantasy of 2017, only held back from the top spot on this list by a fantasy novels for the ages! 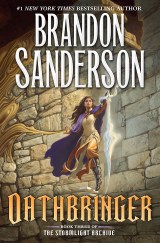 Having binge read the first three novels in The Stormlight Archive this year, I have to say the saga pulled me, gripped me, and mesmerized me with its distinct originality and uniqueness. The world of Roshar familiar yet far different from Tolkien’s LoTR, Martin’s ASoIF, or even Jordan’s WoT. Familiar tried-and-true fantasy tropes turned upside down, sending a reader flailing about in delightful ignorance of what is coming next. Oathbringer quite simply the most magnificent fantasy books I read this year.

1.  Evil is a Matter of Perspective – Adrian Collins

2. The Providence of Fire – Brian Staveley

5. The Realms of God – Michael Livingston