TOP 5 WEDNESDAY: CHARACTERS I ONCE LOVED BUT DON’T ANYMORE

Posted on November 9, 2016 by Bookwraiths

Today, the guys in the Goodreads Top 5 Wednesday group have an interesting topic this week: CHARACTERS YOU ONCE LOVED BUT DON’T ANYMORE!  These are the characters who you used to adore, but now you don’t. Maybe they changed a lot. Maybe you outgrew them. Maybe your outlook changed and now you can’t stand them. Maybe you don’t even hate them, you just are neutral about them when you used to run a fan blog about them.

Sad to say, but we all have these types of characters in our lives.  Most of mine being of the “I Outgrew Them” variety.  Which is to be expected really.  I mean, the people you admire and look up to at twenty-years-old or thirty or whatever is going to be far different than who you admire when you are even older and (hopefully) even wiser.  But it still makes me a little sorrowful that I had to leave these people behind. 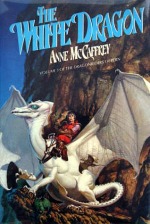 I really thought a lot of Jaxom when I was a teenager.  His aristocratic attitudes coupled with a desire to do the right thing made him exactly the kind of hero I adored back in the day.  Now, I find most of that aristocratic bearing of his rather annoying (though he isn’t the worst example of such in fantasy literature) and his life rather charmed in most respects.  And since I’m not privileged nor will I ever be, I don’t tend to like those kinds of guys much any more.

The main thing I adored about this guy back when I was a teen was that he was driven to succeed.  Raistlin didn’t let anyone or anything get in his way.  And since I was fairly ambitious back then, I found that quality really compelling.  Now, however, after having lived quite a long time since I first encountered old Raistlin and having been around loads of people just like him in real life, I don’t care for his type of personality anymore.  Not saying I don’t still appreciate him as a part of the Dragonlance story, but, unfortunately, he isn’t a favorite of mine anymore.

Vlad appears here due to similar reasons as Raistlin.  This guy was driven to climb his way up the social ladder no matter what he had to do or whom he had to kill.  Sure, he did have a heart, but feelings rarely kept Vlad from his chosen mission.  Plus the guy is clever.  You know, the slick guy who crafts a way to give everyone the shaft as he wins the day.  Seen too many of those types of people over the years.  Don’t like them (or Vlad) much anymore.

2. MARA OF THE ACOMA

This protagonist of The Empire Trilogy by Raymond E. Feist and Janny Wurts was a big favorite of mine for years.  I loved her intelligence, cunning, and irrepressible desire to get to the top.  Yet again (because I know I’m repeating myself over and over again), once I grew up and experienced politicians like Mara  up close I really did not find her qualities nearly so mesmerizing.  Rather she seems excessively cold-hearted and devious.

Ned is exactly the type of honorable, proud, steadfast, and loyal to a fault character I use to adore when I was younger.  I mean, what isn’t to like about old Ned.  And he was my guy in Game of Thrones.  But as I’ve matured the last twenty years and mulled over his actions, I’ve seen that Lord Stark really has some major flaws.  I mean, he refuses to see the bad qualities in others.  He trusts everyone – even when he is told repeatedly not to. He naively imagines his enemies will go by the rules.  He believes that by making the honorable choice everything will work out in the end.  All this leads to him failing to guard against his enemies.  And, when his back is to the wall, he isn’t willing to do what needs to be done in order to protect himself, his family, and the realm when he should clearly see what will happen if he doesn’t.  Talk about self-delusional.  It isn’t that I hate old Ned now, but I merely see that he (like all of us) has some major faults which I personally cannot overlook and which has resulted in him being removed from my favorite character list.

There is my top five.  Agree or disagree with me about any of these guys?  How about you?  Who are the characters you once loved but now can’t stomach?

6 Responses to TOP 5 WEDNESDAY: CHARACTERS I ONCE LOVED BUT DON’T ANYMORE