Posted on September 9, 2016 by Bookwraiths

I’m so very honored to welcome Robert Brockway to Bookwraiths today.  Hopefully, most of you have already tried out his amazing punk rock fantasy series, Vicious Circuit.  If you haven’t you really should go ahead and take the plunge, as books one and two are sitting on shelves everywhere.  And don’t trick yourself into thinking this is just another urban fantasy, because it isn’t.  It is punk rock with some damn devilish “angels” thrown in for good measure.  But enough from me.  Let’s hear all about it from the author himself!

Hey Robert! Thanks for taking the time to answer a few questions!

Thank you in advance for not asking me about “the thing.” 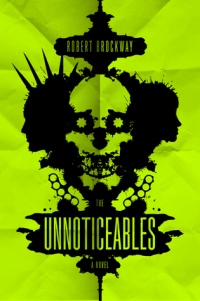 For readers who aren’t familiar with you, could you tell us a little about yourself?

I’m an editor and (mostly former) columnist for CRACKED.COM, as well as the author of one non-fiction book about the apocalypse, EVERYTHING IS GOING TO KILL EVERYBODY, one self-published cyberpunk serial novel, now collected as RX: A TALE OF ELECTRONEGATIVITY, and two for-realties books: THE UNNOTICEABLES and now, THE EMPTY ONES. Those are both part of the VICIOUS CIRCUIT trilogy, with the third book already finished and releasing summer of next year.

What type of story can readers expect to experience with The Vicious Circuit series?

It’s a sort of punk rock fantasy book. A high-stakes epic about monsters and killers, the universe, faith, and the meaning of life… but told from the small scale, by people who really wish they weren’t involved.

People seem to be struggling to put this series in a convenient sub-genre like urban fantasy, horror, or something else. How would you categorize it? Or do you even think it is fair to demand that the story be one category or another?

I am definitely one of those people. I’ve settled on the previous term ‘punk rock fantasy’ for now, because it gets the message across without isolating the book to a genre it doesn’t fully represent. You might be disappointed in the series if you come in expecting straight horror, or hard sci-fi, or conventional urban fantasy – which, going by the best-sellers list, is mostly about the troubles sexy werewolves have with operating human shirts.

Any strong influences for The Unnoticeables or The Empty Ones which readers might notice?

There are so many I don’t know where to start, and even thinking about trying makes me tired, so I’ll just limit myself to a few: There’s definitely some early Stephen King in there, and elements of Lovecraft – not so much in style or storytelling approach; more of an abstract, atmospheric way. Maybe a bit of Hunter S. Thompson, and certainly a little of The Young Ones.

I don’t remember exactly when I first had the idea, but it percolated for a long time. I started with just the very basic concept of ‘math as universal language,’ and everything slowly developed from there. I even explored bits of the mythos as one-off jokes in columns I wrote over the years. There were certainly dramatic changes: Originally this was a time travel story. It is very much not a time travel story now.

The story in both The Unnoticeables and The Empty Ones is told through different POV characters in different time periods. Was it difficult to switch back and forth between them? Did you struggle to get back into one after having spent time on the other?

Definitely. I found I couldn’t switch between POVS on the same day. If I wrapped up a Carey chapter one day, I wouldn’t start on a Kaitlyn chapter until the next. Trying to do both in the same writing session just ended with Carey showing improper concern for his fellow man, and Kaitlyn hucking beer cans at her mother.

Any favorite characters/themes in the series you just prefer to write about?

I didn’t actually know this about myself until just recently, but apparently I’m very concerned with alternate dimensions and what their existence means in regards to our lives. Both my last fiction book, RX: A TALE OF ELECTRONEGATIVITY, and the VICIOUS CIRCUIT series explore those themes – though they’re very, very different books. I blame re-runs of SLIDERS, I guess.

What do you hope readers will be saying once they finish these books?

“I don’t know what the hell that was, but I need new pants.”

Any favorite quote(s) from The Empty Ones that you can share with us without ruining the story?

I like the first line a lot: “I messed up this poor girl’s code, and now she’s got teeth where her eyes should be.”

A novella is a piece of fiction too long to be considered a short story, but short enough that some readers might bitch about it if you called it a novel. It is a pre-existing term with sharp definitions: A short story is under 7500 words, a novelette is 7500 to 17500 words, a novella is 17500 to 40000 words, and a novel is anything above. We have those words. They mean things. James Patterson came along and said “novella? Sounds like a French whore,” and tried to rename them “BookShots.” I don’t badmouth other authors. I’ve got nothing against the man’s work. But this is some Idiocracy crap and it will not stand.

Any sage advice to struggling writers out there?

Quit. Writing is full. There’s no more room. I need to eat, and you’re probably better than me. Go away.

What can fans expect from you next?

Book 3 of the VICIOUS CIRCUIT trilogy, tentatively titled KILL ALL ANGELS, comes out summer 2017. That’s actually done and turned in, though. I’m currently working under a pen name, on a series of connected shorts – think World War Z more than ‘short story anthology’ – that lands somewhere between cosmic horror zombie flick and King’s THE STAND or McCammon’s SWAN SONG.

Where can readers find out more about you? 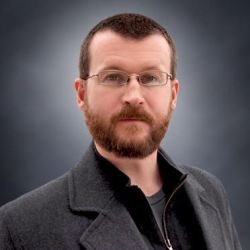 ROBERT BROCKWAY is the author of The Unnoticeables and The Empty Ones (books 1 and 2 of the Vicious Circuit) and is a Senior Editor and columnist for Cracked.com. He lives in Portland, Oregon, with his wife Meagan and their two dogs, Detectives Martin Riggs and Roger Murtaugh. He has been known, on occasion, to have a beard. Visit him online at robertbrockway.net.

This entry was posted in Uncategorized. Bookmark the permalink.

3 Responses to INTERVIEW WITH ROBERT BROCKWAY