FUN DAY MONDAY, OR THE BOOKS THAT WILL HELP ME SURVIVE THE WEEK AHEAD (January 25, 2016)

This week I will be finishing up one of last weeks books: The Muiread as well as starting to read a novel I’ve been eagerly anticipating for a while. 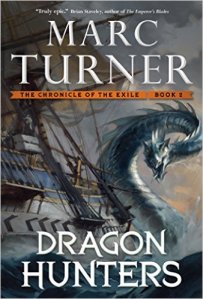 Series: The Chronicle of the Exile #2

Once a year on Dragon Day the fabled Dragon Gate is raised to let a sea dragon pass into the Sabian Sea. There, it will be hunted by the Storm Lords, a fellowship of powerful water-mages who rule an empire called the Storm Isles.

Emira Imerle Polivar is coming to the end of her tenure as leader of the Storm Lords, but she has no intention of standing down graciously. As part of her plot to hold on to power, she instructs an order of priests known as the Chameleons to sabotage the Dragon Gate. There’s just one problem: that will require them to infiltrate an impregnable citadel that houses the gate’s mechanism — a feat that has never been accomplished before.

But Imerle is not the only one intent on destroying the Storm Lord dynasty. As the Storm Lords assemble in answer to a mysterious summons, they become the targets of assassins working for an unknown enemy. And when Imerle sets her scheme in motion, that enemy uses the ensuing chaos to play its hand.

This entry was posted in Funday Monday and tagged Dragon Hunters, Funday Monday, Marc Turner, The Chronicle of the Exile. Bookmark the permalink.

2 Responses to FUN DAY MONDAY, OR THE BOOKS THAT WILL HELP ME SURVIVE THE WEEK AHEAD (January 25, 2016)