FUN DAY MONDAY, OR THE BOOKS THAT WILL HELP ME SURVIVE THE WEEK AHEAD (February 1, 2016)

Posted on February 1, 2016 by Bookwraiths

This week I will be finishing up one of last weeks books: Dragon Hunters as well as a novella I’ve started and then attempt to get to a sword and sorcery novel which sounds great. 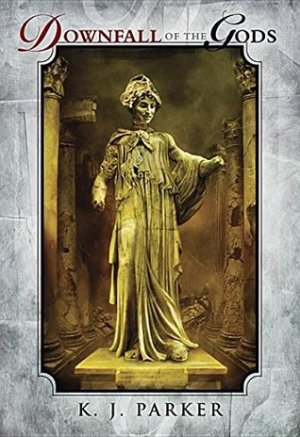 Downfall of the Gods by K.J. Parker

If you visit the Temple and ask nicely for forgiveness, you might get it—assuming you aren’t Lord Archias and you haven’t killed the Goddess’s favorite musician, Lysippus. But even goddesses are expected to follow certain rules, and as much as she wants to punish Lord Archias it seems her troublesome, all-powerful father forbids it. So the Goddess will just have to get around that by forgiving Lord Archias if he can manage some simple—or, rather, seemingly impossible—tasks. A Goddess has to do what a goddess has to do.

And in World Fantasy Award winner K.J. Parker’s sharply inventive new novella Downfall of the Gods that means everything from soothing supernatural egos to accompanying the argumentative Lord Archias on an epic quest to save his soul…and get her own way. As the Goddess and her mortal charge make their way across the world to the Land of the Dead, a host of divine surprises await them. Could what they find at the end be the downfall of the gods themselves? Only time will tell.

Purchase the novella at Amazon.

For more than a thousand years, the dwarves have hidden away from the world in their ravine city of Arx Gravis.

Governed by an inflexible council whose sole aim is to avoid the errors of the past, the defining virtue of their society is that nothing should ever change.

But when the Scriptorium is broken into, and Ravine Guard Carnifex Thane sees a homunculus fleeing the scene of the crime, events are set in motion that will ensure nothing will ever be the same again.

Deception and death are coming to Arx Gravis.

The riddles that preceded Carnifex’s birth crystalize into a horrifying fate that inexorably closes in.

But it is in blood that legends are born, and redemption is sometimes seeded in the gravest of sins.

For Carnifex is destined to become the Ravine Butcher, before even that grim appellation is forever lost, along with everything that once defined him.

3 Responses to FUN DAY MONDAY, OR THE BOOKS THAT WILL HELP ME SURVIVE THE WEEK AHEAD (February 1, 2016)