Flashback Friday is something I’ve been doing here at Bookwraiths for a while now; a time when I can post my thoughts about books that I’ve read in the past but never gotten around to reviewing. With the hectic schedule of day-to-day life and trying to review new releases, there never seems enough time to give these old favorites the spotlight that they deserve. But with a day all to themselves, there is no reason I can’t revisit them, so let’s take a look at one of my all-time favorite fantasy standalones. 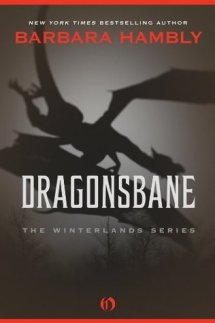 Dragonsbane is a novel I read upon release back in 1985. Obviously, the world was a different place back then, I was a different person (young teenager) and fantasy was of a different flavor. Even at the time though, I knew that Barbara Hambly had gifted her readers with a refreshingly mature fantasy which would stand the test of time.

In the northlands, Jenny Waynest is a not-so-young-anymore sorceress, half-trained, who splits her time between learning her craft and raising her children. The father of Jenny’s brood is Sir John Aversin, and he isn’t your typical backwoods noble. Rather, he is a man of learning, who prefers studying old scientific tomes on engineering and pig farming than fighting. Be that as it may, he and Jenny have been forced on occasion to slay some vicious monsters – including a dragon! And now John is widely known as “John the Dragonslayer” though it hasn’t changed his and Jenny’s life very much.

Then young Gareth shows up.

Gareth is a southerner from the Empire. (The Empire which abandoned the northlands once the mines dried up, leaving their old subjects to the mercies of the northern savages.) Now, though, a huge black dragon has taken the Deep of Ylferdun, killing or enslaving all its inhabitants. Gareth having been sent on a quest to bring the only known dragonslayer back to the Empire to save his people. Only, Sir John isn’t quite what Gareth expected in his shining hero, and he certainly never expected him to be involved with a plain looking, plain spoken witch.

Desperation finally leads Gareth to accept John and Jenny for who they are; the three braving a dangerous journey back to the Empire to confront the dragon. But once there they find that Sir John and Jenny are viewed as a huge joke by the royal court, the king might be under the sway of a beautiful witch, and the dragon could be much more than a savage beast.

“Traditional fantasy,” I hear some of you saying to yourself.

So why do I recommend Dragonsbane so highly?

When I was a teenager, I loved the book for its escapism and adventure. Simple enough, right? Because Ms. Hambly takes the traditional fantasy tropes, twists them about a bit, adds some complex characters like the dragon (He was a favorite of mine at the time!) and turns this familiar dragon slaying quest story into a new and exciting adventure. Pure sugar-coated fantasy fun!

As I’ve matured (i.e. become middle aged), what brings me back is the depiction of John and Jenny. These guys are so familiar to my own real life: two middle aged people in a committed relationship with kids. Yes, they still love one another – even though they drive one another crazy – but they are both struggling with regrets, specifically the realization that due to circumstances they are never going to achieve their lifelong dreams. Yes, that causes Dragonsbane to be sad at times (though John and Jenny’s plight went over my head when I was thirteen), depressing even, but Ms. Hambly handles it all so deftly, so delicately that there is more joy and hope than doom and gloom, as this couple lives their life together.

I’m pretty tough on books. Hard to impress. Difficult to sway once my mind is made up. Perhaps my lifelong love of Dragonsbane is so deeply ingrained in my psyche that I can’t see its faults, but in my eyes, this is as close to perfect as traditional fantasy adventure get, and I’d encourage everyone to give it a try.