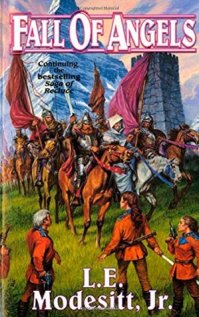 Series: The Saga of Recluce #6

The Saga of Recluce is a series which has captivated readers for decades, spawning 19 books so far, and soon to include installment twenty, Outcasts of Order, which hits shelves on June 19, 2018. One of the main factors contributing to the longevity of the saga the novels’ variety, as L.E. Modesitt, Jr. has effortlessly shifted his stories from one time period to another in Recluce’s long history, focusing in on legendary characters and explaining historical facts. Fall of Angels arguably one of the best examples of this, as it explores the founding of the mythical, female ruled land in Candar.

The story begins in exciting science fiction fashion upon a starship of the Angels (Humans from the various “cold” planets of “Heaven”). The commanders of the predominately female crew (Only three men!) tapped into a ship wide neuronet (a mental command program which controls every aspect of the ships and its systems), frantically preparing for battle. Of primary importance are two people among this group: Captain Ryba, a no nonsense commander, and Engineer Nylan, who is a competent techie but definitely not a leader. These two are sexual partners but not really romantically involved, as it is very clear the Captain has no emotional attachment to Nylan and views him as a tool to satisfy her professional and personal needs.

Very quickly after our brief introduction, the Angels are part of a space battle with the forces of the Rationalists, or “Demons” (Humans from the “warmer” worlds of “Hell”). The conflict resulting in their ship being thrown into another dimension, where they take quick action to safely land in the icy mountains of an alien world.

There is only one problem with the new planet they arrive on: it is already inhabited by the remnants of a Rationalist colony. These people very patriarchal and feudal in nature, viewing the new arrivals as instant enemies who must be attacked and destroyed.

Quickly, the Angels discover they are stranded on this world; their technology slowly ceasing to operate. Ryba and Nylan taking up important roles in the titanic task of building up their refuge’s infrastructure and defenses before their technology completely dies. Added to their monumental tasks an even more difficult problem of how to control the “changes” some Angels have undergone by their arrival in this new dimension.

Mixed into all that civilization creation is the main plot of the book: the clash between the patriarchal and matriarchal systems. It is actually quite brutal and harsh, yet also very enlightening. Modesitt taking the traditional gender roles of Western Civilization, twisting them inside out, and allowing the rival societal narratives to compete against one another. Ryba becoming the physical embodiment of the matriarchy, Nylan the physical embodiment of modern gender equality, and the rulers of the world the physical embodiment of the ancient patriarchy. The different representatives very believable avatars of their differing philosophies; their clashes quite dramatic, as a rousing philosophical debate lurks just beneath the surface of this fantasy tale.

As for any negative with the novel, the main one I had was the huge amount of page time spent on the establishment of the Angels’ colony. I certainly understood why all these actions needed to be taken to ensure the survival of the ship, but it was too much of a good thing for me personally. I can’t read about farming and furniture making but so long before my mind tends to wander to other things.

A lesser complaint but still one nonetheless is the characterization of Captain Ryba and Engineer Nylan. As the story progresses, the former’s single minded implement of a matriarchy grew tiresome. Her explanations for her discriminatory behavior half-hearted. Her rationalizations regarding her gender being held back in Angelic society ringing somewhat false. And Nylan really did not act as a counterpoint to Ryba. The fact he spent most of his time engrossed in his self-doubt and self-loathing, making no attempt to confront Ryba’s behavior, left the struggle between the two gender avatars without any true conflict.

All in all though, Fall of Angels was a fine Recluce adventure filled with detailed world building and a compelling look at the clash between the patriarchy and the matriarchy. If you are already a longtime reader of Modesitt’s saga or just someone interested in taking a peak at this fantastical place, then this legendary tale in the history of Recluce will certainly be an entertaining one which you shouldn’t pass on.

Lastly, I’d be remiss if I didn’t mention the fact that as part of the Recluce celebration Tor will be re-released the first three Saga of Recluce books October 2018 with stunning new artwork by artist Marc Simonetti. Check all the news about the saga at Tor.com or take a look at the awesomeness below! 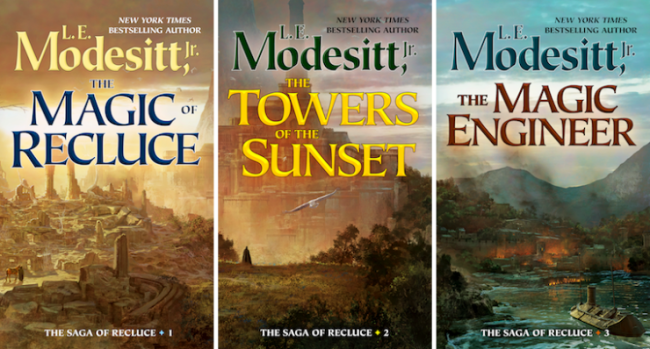 This entry was posted in 4 Stars, Fantasy and tagged Fall of Angels, L. E. Modesitt Jr., Outcasts of Order, recluce, Saga of Recluce, The Magic Engineer, The Magic of Recluce, The Towers of Sunset, Tor, Tor Books. Bookmark the permalink.

3 Responses to FALL OF ANGELS