A combination of suggestions from several people, as it seems many want to talk about the various animals that people in fantasyland ride. So be they horse, bear, or other let’s talk about favorite rides.

Now, this is a great topic. We all love those heroic mounts that take our favorite hero into battle. I mean, there has to be a lot of these out there, right? Let’s see which ones we can find.

SHADOWFAX (LORD OF THE RINGS) 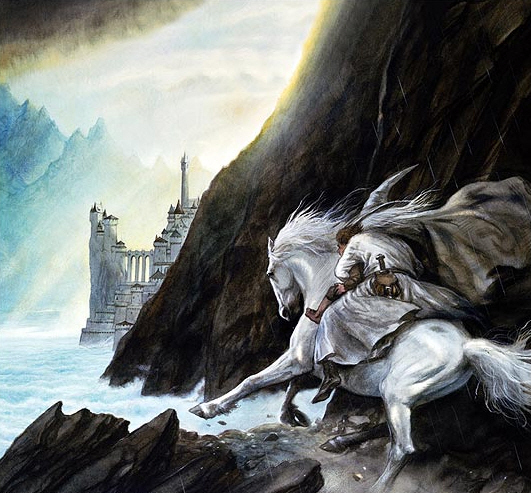 If you are going to start listing beloved mounts Shadowfax must be on the top of that list.

The Lord of Horses was said to be the greatest steed of Middle-earth. He was so intelligent that he could comprehend human speech, and the legends suggest that he could outrun the wind! Untamable by the Rohirrim, he was later given to Gandalf the White by Théoden, the 13th king of Rohan, and strode upon the fields of the mighty during the War of the Ring.

Yeap, old Shadowfax. He is a legendary mount. He almost makes me wish I could ride a horse.

Buy The Lord of the Rings: 50th Anniversary, One Vol. Edition

Mightiest of the ancient dragons who were awakened by Caledor Dragontamer, Indraugnir was both the mount and companion of the Phoenix King of the Elves in the Warhammer Universe. To say the dragon was both a boon and a curse to Aenarion sounds too prophetic, but in reality, only by the might of Indraugnir was the Phoenix King able to accomplish an impossible deed that cursed both him, his family and the whole world.

While others point out that with his dying breath Indraugnir took Aenarion back to the site of the ill deed to rectify it somewhat and save the world from total destruction, it might be said that such prowess by this mighty dragon was too little, too late.

RUTH (THE DRAGONRIDERS OF PERN) 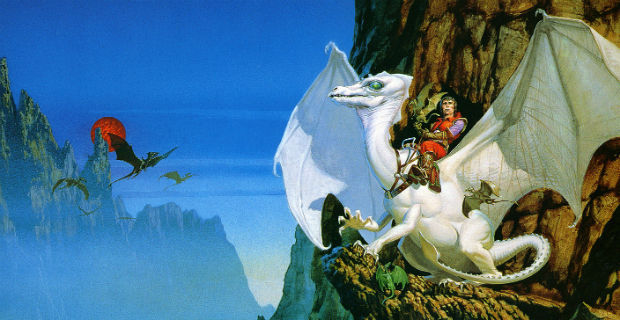 The only white dragon ever mentioned in any of the Pern books, Ruth is a unique dragon for many reasons.

First, his hatching was very peculiar, as young Lord Jaxom actually aided his emergence from his shell.

Two, Ruth’s small size causes him to be ridiculed by most other dragons.

And three . . . well, let’s just say Ruth turns out to be a very gifted dragon.

For all those reasons (plus his humorous personality), Ruth has always been my favorite dragon of Pern.

TALAT (THE HERO AND THE CROWN)

Whenever a warrior is going out to do battle with vicious, fire-breathing dragons, it is always good for him (or her) to have a steadfast steed along to help out. And young Aerin finds that steed in her father’s old warhorse Talat.

As the story progresses, Aerin and the readers begin to understand not only the bond these two companions have for one another but the importance Talat plays in everything Aerin does. For I am not exaggerating when I say that Aerin would not have survived her adventures without good, old Talat along to ride.

Buy The Hero and the Crown

Okay, I have to admit it: I actually like Percy Jackson. At first, his novels were just some interesting stories to read my kids at night and get them to fall asleep, but along the journey from The Lightning Thief to The Last Olympian Seaweed Brain grew on me. So much so that I’ve been trying to convince my sons to read some more of the novels.

One of my favorite characters in the series is old Blackjack. Not because he has a large role or is included in all the action, but because who wouldn’t like to soar the skies on a black Pegasus. It would be a childhood dream come true for me, at least.

FARAN (THE ELENIUM and THE TAMULI)

Sparhawk is a grizzled, veteran knight who has been at the heights of power only to find himself banished from his own homeland. Many fear him, but all respect him — except for his warhorse Faran.

This horse is a spirited steed, who finds ways to communicate his displeasure to his knightly master. To say the two of them have a less than happy relationship is an understatement, but perhaps this isn’t all Faran’s fault, because the child-goddess Aphrael once tells Sparhawk that Faran only has a bad temper because he is trying to duplicate Sparhawk’s own. But no matter their differences (or similarities), Faran is a steed and companion who Sparhawk can always depend on when things go wrong. And they always seem to!

Buy The Elenium: The Diamond Throne The Ruby Knight The Sapphire Rose

BREE (THE HORSE AND HIS BOY — THE CHRONICLES OF NARNIA # 5)

How could I go a whole list and not include at least one anthropomorphic animal from The Chronicles of Narnia?

Well, obviously, I couldn’t. I mean, it is impossible. And Bree is the Narnian beloved steed I have to point to. A horse that rescues a young boy from slavery, helps him escape from his pursuers, and teaches him more than a few lessons along the way. Bree is definitely a steed that any person would love to have, especially a youth in need of love and guidance.

Buy The Horse and His Boy

To this point in the list, we have dealt with several trusty steeds. Whether they were horses or dragons hardly matters, since, in their relationships, they were all definitely the one carrying the human or elf around. But in Mr. Rowley’s military fantasy adventure Bazil Broketail, the tables are turned.

In this fantasy land, the elite fighters are the dragon legions, who are armored, fight side-by-side with their reptilian brethren, and have orphan boys who act as their squires. And while Bazil’s orphan boy is one of the stars of the show, he spends a great deal of time feeding, grooming, and taking care of the needs of his “battle dragon.”

Needless to say, this series was a great twist on the usual human-dragon relationship. But just so you know, the orphan boys still ride to battle on the backs of their battle dragon (though these dragons are hardly mounts), so technically, I’m including Bazil on the list.