Flashback Friday is something I’ve been doing here at Bookwraiths for a while now; a time when I can post my thoughts about books that I’ve read in the past but never gotten around to reviewing. With the hectic schedule of day-to-day life and trying to review new releases, there never seems enough time to give these older books the spotlight. But with a day all to themselves, there is no reason I can’t revisit them, so let’s take a look at the sequel, if you will, of one of my favorite fantasy classics: Dragonsbane. 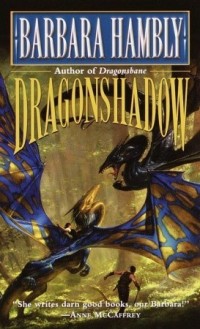 Whenever an author revisits a beloved story from the past, especially with the idea of transforming it into something very different from the original, they should do so with utmost caution. I know, change is a part of life. Evolution to people’s personality is natural. But just because a story doesn’t end when “The End” is written, doesn’t necessarily mean a writer should chronicle those further adventures, because sometimes they are not exploits a reader wants to read about. And, unfortunately, Dragonshadow begins a trilogy which proves exactly that point. At least, in my opinion, it does, which is a hard thing for me to say since I adore most everything Barbara Hambly has ever written.

Like a lot of people, I read Dragonsbane years ago and loved it. As naive and light as the novel was, the characters were compelling, John Aversin and Jenny Waynest’s relationship was realistic portrayed, and the ending tied up all the loose ends, sending our heroes off into the sunset to have as nice a life as they possible could. So I was excited when I discovered Dragonshadow and the Winterlands trilogy it begins.

Damn, was I wrong.

Dragonshadow starts off by establishing the dark and gloomy tone which will infuse the rest of the series; a reader inundated with proof of the downward spiral of John Aversin and Jenny Waynest’ relationship. Not that their petty quarrels, lack of empathy for each another, and general disillusionment with one another was unrealistic given their long term relationship and kids underfoot, but it was downright depressing how far our former committed and loving duo had fallen. Then things got really bleak and depressing.

You see, there is something foul taking place in the land. An evil force having reawakened, determined to destroy the entire world after having suitably tormented every living thing it can find. And soon John and Jenny are embroiled in trying to stop it, because their twelve-year-old son is its captive!

Okay, that setup might sound interesting. I thought it was when I first picked the novel up, but quickly it became tedious for several reasons.

One, the first half of the book had little if anything to do with the actual plot, but, rather, they read like filler material. Sure, they revealed John and Jenny’s life since the close of Dragonsbane, introduced a few new characters, and even sent John on a lengthy quest to reunite with a scaly creature from book one, but none of it really amounted to anything. Even the huge “quest” was nothing but an easy plot device to get John out of the way while the villains were revealed.

Two, the villains. This was a huge letdown for me. One of the villains was so easy to spot I saw it coming from the very beginning. Honestly, I got angry when it seemed I had guessed right chapters before. Even when the big reveal occurred, I still held out hope it was all some slight of hand by Ms. Hambly. Alas, no luck.

Four, the ending. Even though I had reservations with the novel, I persevered to the end, determined to find some silver lining to make this experience worthwhile. My reward wasDragonshadow ending without any meaningful resolution to anything.

I hate writing negative reviews of books (especially books written by my favorite authors), but sometimes it is unavoidable. This is one of those times. As light and naive as Dragonsbane was, it was a fantastic, classic fantasy with a near perfect ending; why Barbara Hambly decided to revisit this world and these characters only to deconstruct them in the most horrible of ways is anyone’s guess. Yes, their lives continued after Dragonsbane ended, but I believe this new chapter in their story might have been better left untold.

Don’t take my word for it though.  Purchase the book at Amazon.