Some people are just ridiculously good at everything. Be it magic, swordplay, or all of the above. THE ACE has no equal.

Well, I’m going to interpret this topic as being about Mary Sue or Marty Stu characters. I might be wrong about that, but my “Aces” are going to focus on those types of characters.

While I was awestruck by Prince of Thorns, I began to feel that Jorg was turning into a bit of an Ace, or Gary Stu, characters by the time I finished reading King of Thorns. While I know lots of people don’t agree with my dislike of this ever more powerful direction with Jorg, I think we can all, at least, agree that this guy is definitely an “Ace.”

In Prince, our favorite Ancrath is fourteen years old, but already a great swordsman, amazing tactician, and ruthless leader of a group of bandits. Later in the story, he shows an mindnumbing grasp of ancient history and ancient language (which he uses to decipher maps and texts that no one else ever has) as well as basically being better, smarter, and craftier than anyone he meets.

By the end of book two, Jorg has added to his amazing skills the power of necromancy. A skill that he appears to be stunningly proficient with little or no training in its use. Plus, Jorg is still more clever than anyone else alive in the world — as far as I could tell anyway.

Like I said, I’m not trying to hate one of my all-time favorite bad guys (Jorg is a bad guy in my eyes.), but he is definitely an “Ace” who seems to just be blessed with greater ability in everything than all his contemporaries.

at Amazon.
HORACE (THE BOOK OF THE BLACK EARTH by JON SPRUNK) 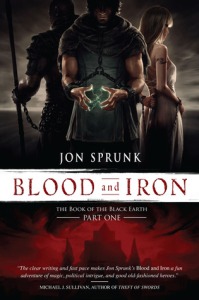 Now, I really hate to pick on this next guy, but even though his character morphs into less of an “Ace” or “Gary Stu” in the second book of the series, Horace was WAY good at everything at the start of this series.

It all starts off innocent enough in Blood and Iron. Horace beginning the story as a peasant nobody on the way to a Great Crusade before a storm shipwrecks him in enemy lands. This twist of fate results in him being captured and enslaved by his enemies. But before you know it, our dear Horace is discovered to be the most powerful sorcerer seen in the Akeshian Empire in generations! Not only that, he also turns out to be such a sexy man that every woman (including the ruling queen) can’t wait to get their hands on him!

Yeah, it was good to be Horace in book one. Well, at least, after the whole slavery thing, anyway. So for these reasons, Horace has got to be one of my top Aces.

Buy Blood and Iron (The Book of the Black Earth 1) 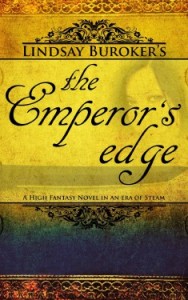 Not wanting to only hate on male Aces, I thought it was about time to list my first female Ace, and I couldn’t think of a better one than Amaranthe.

Now, before I say any more, I want to go ahead and acknowledge that some reviewers believe Buroker deliberately made Amaranthe a “Mary Sue” character to imbue the series with a “campy” feel, and since I haven’t spoken to the author, I don’t know if that interpretation is true or not. What I can say is that Amaranthe fits our “The Ace” topic extremely well.

In The Emperor’s Edge, Amaranthe begins as a police woman who is stuck in a dead end job with no hope of advancement. Soon, however, she turns into a woman who steals the heart of an emperor with a glance, wins the devotion of the most vicious assassin in the empire, outwits master politicians, outthinks foreign spies, and even outlasts a biological weapon unloaded on her. (No, I’m not exaggerating with that last statement.) Added to all this, our dear Amaranthe is the purest of hearts who wins the vilest of people over to her due to her nature. It is good to be Amaranthe in The Emperor’s Edge.

For these and many more reasons (Sorry, I’ve forgotten everything else Amaranthe is great at.) this lady has to be on my Aces list.

Honestly, I hate to even put Eragon on the list, because I know Paolini was a teenager when he wrote this and that is probably why the title character is such an absolute Ace. I mean, the whole book reads very much like a teen’s wish fulfillment fantasy, after all. No matter my misgivings, however, Eragon has to be here.

As the story begins, Eragon isn’t anything special; he is just a simple farm boy. Soon, though, his transformation into a total Ace begins. First, he turns into a master swordsman seemingly overnight. (I know he practices for a few weeks, but he is a master in that short a time?) Second, he goes from illiterate to literate in record time then begins to learn the ancient language of magic, which he is brilliant at. Magic? Not a big problem. Everything seems to come easy for this youth once he leaves home. I’m sure he wished he had fled sooner.

You really can’t be much more of an Ace than Eragon.

DRIZZT DO’URDEN (THE LEGEND OF DRIZZT by R.A. SALVATORE)

I’m not what you would label a Drizzt fanboy. Sure, I really enjoyed the Icewind Dale trilogy when it was initially released years ago, and, yes, I’ve found the Companions Codex a fun, entertaining read, but I’m not so attached that I can’t see the inherent flaws in this famous drow. The main one being he is an Ace — especially when it comes to his battle prowess.

As anyone who has read Drizzt knows, the guy is the best swordsman ever. At least, it seems so. Over the years (and his many books) he has also accumulated an assortment of magical items that have given him numerous skills; skills that have made him nearly a one man army. Well, maybe, he isn’t a one man army, but you get my point, the guy is a bit overpowered at times.

Like I said, I really enjoy Drizzt’s adventures, but at times, I wish he was not such an Ace. A little frailty would make him an even better character, in my opinion.

Buy The Crystal Shard: The Legend of Drizzt, Book IV

Some people might find this Ace pick a bit perplexing, since Kelsier isn’t the most powerful person in the book. I mean, the Steel Inquisitors and the Lord Ruler are way overpowered compared to Kelsier. But I’m putting him on this list not for his overpowered allomancy skills but because of his other skills: his cleverness and cunning.

Without going into the ending of the novel, I will just say that something happens which takes an enormous amount of deviousness, planning and manipulation of not just a few people but multitudes. The scope of it is nearly mind boggling. In my opinion, the ability of one person to accomplish it is beyond belief. And for Kelsier to be able to pull this event off was a bit deus ex machine, turning him into an overpowered character in my opinion.

But that is just my opinion.

EVERY ASSASSIN IN FANTASY

I know this one is very broad, but I’m just very tired of every assassin in fantasy literature being an Ace. Whether it’s Royce in The Riyrian Revelations or Kylar Stern of Night Angel or whomever, these never ending parade of assassins seem very overpowered to the point of being more superheroes with super powers than true flesh and blood people trained to kill.

15 Responses to TOUGH TRAVELING — THE ACE