PRINCE OF THORNS (THE BROKEN EMPIRE #1) by MARK LAWRENCE 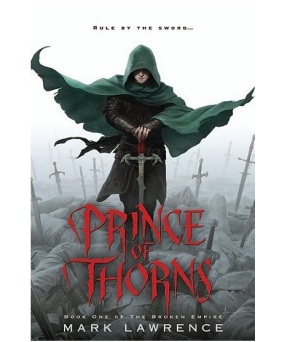 Prince of Thorns by Mark Lawrence

I’d heard a lot about Prince of Thorns before I picked it up. Naturally, some of the reviews were positive and some of them were negative. After reading the novel, I can honestly say I understand both points of view, because I found myself mesmerized by Mr. Lawrence’s first-person narrative yet horrified at the person I was reading about. But, beyond any doubt, this is a book that every fantasy fan should read at least once — and many will read over and over again.

The bloody tale spun by Mark Lawrence centers on Jorg Ancrath. A ten year old who flees privilege to grow up with a band of highway men, stealing, raping, torturing, and killing everyone in his path, as he follows a convoluted pathway to revenge. Revenge against the man who killed his mother and brother, but also revenge against the world which has somehow failed him.

Now, Jorg is no hero, nor is he an anti-hero by anyone’s definition. In many reader’s eyes, Jorg will be evil incarnate, though I do not believe he views himself in quite that light himself. No, Jorg seems to picture himself above the petty, frailties of humanity, as if the hook-briars, which gave him his moniker, drained both his blood and his morality away at the same time. This allowed him to see life for what it really is, for as Jorg himself explains:

“When they killed him(Jorg’s brother), Mother wouldn’t hold her peace, so they slit her throat. I was stupid then, being only nine, and I fought to save them both. But the thorns held me tight. I’ve learned to appreciate thorns since. The thorns taught me the game. They let me understand what all those grim and serious men who’ve fought the Hundred War have yet to learn. You can only win the game when you understand that it IS a game. Let a man play chess, and tell him that every pawn is his friend. Let him think both bishops holy. Let him remember happy days in the shadows of his castles. Let him love his queen. Watch him loose them all.”

Life is one huge chess board to Jorg, filled to the brim with pieces he can cast aside as he sees fit. Those you love or care for or feel responsibility toward are merely weaknesses, holding you down. “Anything that you cannot sacrifice pins you. Makes you predictable, makes you weak.” Indeed, to our young Prince of Thorns’ thinking, there is only one expectation placed upon any leader: “not to kill too many of your men. Or who’re you going to lead?” This is Jorg’s world view, which he pursues with a relentlessness seldom seen in fantasy novels.

But he has other endearing qualities though, right?

Nope. Not any that I recall.

In Jorg’s defense, his is an esoteric view of reality, which justifies all his moral faults, because his cruelty and heartlessness are merely the true state of man’s nature, not the lies people tells themselves about honor or love or being a “good man.” (Survival of the fittest on steroids, if you will.) No, those antiquated notions of “civilized” people are the lies . . . the deceptions to Jorg. Only he truly appreciates men and the world they have built for themselves, the untruths people have plastered upon the true face of reality to make themselves feel better. Life is about surviving and obtaining what you desire. The truth is that “pride” is what drives man, makes him reach for something higher than himself, and forces him to sacrifice anyone and everything in order to achieve it.

Jorge explains this view of reality to his peeping toms (readers) throughout the book. His thoughts laying out a framework that points to each man deciding his own fate. No god controls Jorg Ancrath. No divinity or morality defines him. He is a primal force of nature, exhibiting to all around him that man is the god of this world and can live his life however he chooses. The evils, which he metes out against his fellow human, merely an expression of his divine right to set his own rules, master his own fate, and play the game the way it was meant to be played – unless you have the strength to stop him from doing so!

That is the reality Jorg Ancrath demands that you look at and understand. Many times, it seems he is standing over his next victim yelling at the reader to take a good look, because this is what awaits you when you set yourself up as gods. For when every person is their own god and can define their own morality, there is nothing left to stop a Jorg Ancrath except brute force. Might makes right!

Now, it is no easy task to write a character as devious, blood-thirsty and committed to his world view as Jorg. Most times an author who tries, fails due to the believability factor. A few too many rapes or people tortured, and the character ascends into the land of fairy tales, where witches live in ginger bread houses and cook lost children in their ovens. However, Mr. Lawrence never crosses that imaginary line into unbelievability. Jorg’s mixture of philosophical musings and absolute viciousness creates a character who seems as real as Adolf Hitler or Joseph Stalin on a History Channel documentary.

Even the constant flashbacks between present and past Mr. Lawrence uses to tell Jorg’s tale doesn’t detract from this book. Normally, I cannot stand an author jerking me from place to place, and especially from present to past, but here Mr. Lawrence does it so seamlessly that it never disrupts the natural flow of the novel but actually adds another element of enjoyment, as a reader is allowed to put the jig-saw pieces together to understand how Jorg Ancrath became this monster you are reading about.

But the cherry on top of all this is Mr. Lawrence writing slight of hand, as the standard, medieval fantasy setting is turned on its head and turns out to be so much more than a reader initially expected. This mysterious history only adds to one’s desire to explore, discover and learn about this world, which has birthed and nurtured a Prince of Thorns.

Now, there are always thing about a book that do not work no matter how good it is. Prince of Thorns had it share of those like every other novel. I’d feel remiss if I did not point out my few criticism of the novel.

First, Jorg routinely accomplishes physical feats at nine, ten and fourteen that seem impossible. Perhaps I feel this way because I have an 11 year old and 9 year old son, but it is true nonetheless, because no child – no matter how mentally deranged – would have the brute strength to do many of the things Jorg supposedly does when he is so young. Even at fourteen years old, the believability factor of many of Jorg’s physical accomplishments just seems ridiculous.

Two, Jorg’s descent into madness seemed a bit too quick. He is shown as a normal, well-adjusted child of royalty; all the privileges of life accruing to him before his mother and brother’s tragic killings. Hell, he himself says his mother would leave their home before criminals were executed to spare him from such atrocious events. So, I believe it is fair to say Jorg Ancrath was “sheltered” in his world’s context from the true horrors of life. However, our normal, nine year old becomes the poster child for sociopaths everywhere over night basically. It just was too much of a stretch for me, even though I enjoyed reading about it.

Third, Jorg constantly rolls the dice of chance, counting on his deviousness and pure luck to allow him to win every encounter he finds himself in. And throughout the book, he makes wilder and wilder decision; many with no real plan at all, yet it always works out for Jorg. He wins time and again against impossible odds, where no one would have been able to overcome the fundamental difficulties of what he was attempting, but which poses little hindrance to Jorg’s inevitable triumph.

[spoileralert] To those who do not understand what I am referring to, I’ll give one example, though there are many throughout the book. At one point in the tale, Jorg ends up at his childhood home with his father the king, has a confrontation with dear old dad, and is then stabbed by his father. Of course, even though dad wants Jorg dead, he doesn’t kill him or have him killed. Nope, the man who stabbed Jorg has him taken and throw on his mother’s sarcophagus, where he is left to die. Not even a guard to make sure he dies. Nothing like that. Dear old dad just forgets all about his son, whom he wanted dead.

Jorg lays in this state near unto death for days if not weeks until he amazingly recovers. The Prince of Thorns has overcome the laws of nature, recovering from a wound that nearly pierced his heart, overcame dehydration, lack of food for days or weeks, and the onset of infection in said wound, even though he obviously had no medical care. And when he finally awakes, Jorg is seemingly in better shape than one of his companions, who has been imprisoned the whole time but presumably was given food and water occasionally. All this without magic or divine intervention. At least, if either of those had been present, it would have made sense, but as it was written, Jorg is just superhuman I suppose.

Four, Jorg and everyone else in the book are basically not worth killing. No good guys at all here. While it was refreshing to read about a truly evil character like Jorg, I also had nothing to contrast his despicableness against. I personally find it more interesting when there are two sides in a confrontation, where I can “root” for someone. Here, Jorg is basically killing other people who act as viciously as he does or people who happen to be around when he wants to kill someone, so I never really “cared” about the outcome, because I did not have anyone to “root” for or against.

To sum up, other reviewers have hailed Mark Lawrence’s book as “a breath of fresh air in a genre where characters often fall flat.” I won’t go that far, but I will say it is an interesting twist on the traditional, fantasy genre. The story of a sociopath, wielding a sword to destroy his fellow humans while espousing his own brand of morality, was an interesting read. No matter how distasteful Jorg is – and believe me he does not have a single redeeming quality to salvage his soul in this book – you find yourself wanting to read more about his story, hoping that somewhere along the line he has an epiphany that reveals his erroneous morality, or that a true hero shows up and cuts his heart out. Neither happens in this book, but there are two more books to read. Hope springs eternal as the old saying goes.