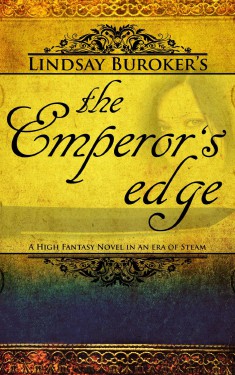 The Emperor’s Edge by Lindsey Buroker

After all my friends had positive things to say about The Emperor’s Edge, I decided to give it a try. Any novel that was described as “one of the bright stars of fantasy self-published fare” was something I had to read. (For those who were wondering, one of my friends used that description.)

Well, after finishing this one, I can understand why so many people adore Lindsay Buroker’s steampunk fantasy epic. However, the fun, campiness of the tale underwhelmed rather than charmed me.

The Emperor’s Edge begins with Amaranthe Lokdon, a woman enforcer, of Stumps, the capital of the Empire. As a female officer, she is a rarity in town (even though women are the business owners of the city) and a stickler for proper enforcer behavior, determined to rise up the chain of command so that she can change all the wrongs of the male-dominated department. One day, Amaranthe finds herself patrolling the city when she stumbles upon a crime; thereafter, she single-handedly takes into custody several “bad guys” while unbeknownst to her the young emperor watches. Thereafter, Emperor Sespian complements her for her daring-do, bides her au revoir and that is that — though he is somewhat fascinated by her.

But a single pebble can begin a massive landslide. At least it does in this novel, where the brief meeting between the young Emperor and a female police officer sends tremors through the status quo at the imperial palace. For you see, Commander of the Armies Hollowcrest has been the real power behind the young Emperor for years, viewing his young charge as a mere figurehead while he holds the true reigns of power in the Empire, and when he hears that Sespian has an interest in a female enforcer he views it as a threat to his monopoly over imperial power. (Why he feels this way is never fully explained.) Thus, the commander determines to kill Amaranthe. But since arranging the disgrace, disappearance, or death of a police officer is too much for the most powerful man in the Empire to facilitate, he personally meets with her at the imperial palace before sending her off to kill the most wanted assassin in the empire. All this done to get her out of the way.

Did I mention that Amaranthe had met the emperor only one time for maybe 5 minutes? Yeah, I guess I did mention it didn’t I.

Anyway, from this somewhat head-scratching beginning, the plot moves forward with Amaranthe quickly turning into a rebel against Hollowcrest. Soon, she gathers together a motley group of people whom she convinces to aid her in a plot to destabilize the Empire; all of them somehow getting onboard with trying to overthrow the most powerful man in the Empire — even if it might mean their deaths.

Now, to say, Amaranthe is the star of the tale that follows is like saying Batman is the main character of his movies. It is without a doubt a fact, not a theory, and in The Emperor’s Edge, Amaranthe quickly morphs from a simple police officer into a “Mary Stu” character. Only she can charm the most heartless of men. Only she can escapes death time and again. Her goodness of heart turning even the most hard-hearted criminal into her ally. Soon, she is not only capable of outwitting the most powerful and corrupt politicians in the empire, but also outthinking the most devious spies and wizards. Hell, even biological weapons have no chance against Super Amaranthe!

When I spoke these feeling out loud to my friends, they immediately pointed out that Amaranthe’s “Mary Stu-ness” and the somewhat silly plot was all campy fun. The eye-rolling luck of the good guys very much like an old school superhero comic or a classic, pulp fantasy. And I totally agree that it can be read that way, because Buroker does seem to emphasize the humorous camaraderie between Amaranthe and her helpers over the complicated realism of a true epic fantasy thriller. However, even though I did warm up to Amaranthe’s interaction with her co-conspirators, the unrealistic campiness of everything grew into more of a negative with me rather than a positive. Something that inevitably ruined my overall enjoyment of this novel.

So to wrap this up, The Emperor’s Edge is a fantasy set in a world of steam with some fun characters and many laugh out loud moments, but the only way to fully enjoy it is to accept that campy adventure is the rule, not the exception here.