THE VISCOUNT AND THE WITCH (RIYRIA SHORT STORY) by MICHAEL J. SULLIVAN 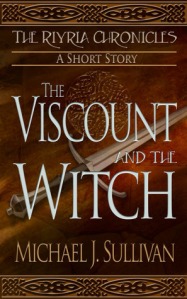 The Viscount and the Witch by Michael J. Sullivan

“The Viscount and The Witch” is a short story, which introduces readers to Hadrian and Royce: the heroes of The Riyria Revelations. It takes place several years before their adventures in that series, but within the time frame of The Riyria Chronicles.

The tale itself revolves around Royce and Hadrian traveling and encountering obstacles along their path – including a “witch.” These “bumps” allow the author to highlight the differences in Hadrian’s more optimistic, naive character and Royce’s brooding, pessimistic outlook on life and people. It also gives Mr. Sullivan the chance to introduce a landless, pathetic noble named Viscount Albert, whom our heroes befriend and save from himself. (Albert, of course, goes on to play a role in The Riyria Revelations.) Through all this, a reader begins to see the making of Hadrian and Royce’s partnership, which is the central point upon which Revelations balances.

I only have three complaints about “The Viscount and The Witch.” One, the story is very light on plot. There isn’t much that actually happens other than Royce proving to Hadrian that he is too trusting of others. Two, it is too short. Once you actually become engaged in the tale, it is over. Three, while it is a standalone story, I believe you will find it much more enjoyable if you have read at least one of the novels, so as to have an emotional attachment to Royce and Hadrian, because this tale is too short for one to really develop.

Even with my complaints, I still found “The Viscount and the Witch” to be a light, entertaining read that all fantasy fans (especially Riyria readers) will enjoy.

Buy the story at Amazon.

1 Response to THE VISCOUNT AND THE WITCH (RIYRIA SHORT STORY) by MICHAEL J. SULLIVAN