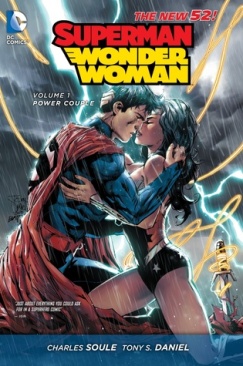 Okay, DC has toyed with the idea off and on for decades.  For whatever reason though, they have never let the most obvious hook up in comic history take place until now.  And I for one think it is about time, because this “Power Couple” is damn interesting to read about.

The story here naturally revolves around our two heroes trying to manage a relationship in the public eye (One that evokes lots of negative emotions in people) while also attempting to maintain their privacy (Clark has that annoying secret identity after all) and not let their superhero activities suffer as they fight a fairly impressive array of enemies.  A damn hard thing to do, especially since the New 52 Superman is a powerful but fairly awkward farm boy-type and Diana is a very confident, demi-god who is generally in charge. Somehow, though, they make it work in fine form in this story line.

One thing that Charles Soule does a great job of doing in this one is not focusing too much on feelings.  Okay, there are a few scattered moments where Clark (It seems he is more in touch with his emotional side than Diana) expresses a doubt about them being together and tells WW how he feels, but mostly those are brief interludes in-between these guys fighting it out with enemies, or trying to steal a few hours of peace to have dinner or go dancing.  And that really rang true of how you’d think a relationship between two superheroes would be.

As for the art, it was excellent in my opinion. Fights, conversations, or emotional moments, Tony Daniel and the art team nailed them all in a clean style that never overwhelmed the story.

Now, even with all that gushing, I have to be honest and say I’m going to enjoy this relationship while it last, because it can’t last long.   Yeah, I know I said Diana and Clark hooking up was a no-brainer, but a long term relationship?  Naw, I can’t see it.  These two are just too different from one another: the demi-god Diana rather too aloof (in my opinion) and too violent for the farm boy Clark, who is looking for someone to settle down with and just be normal.  And you can’t illustrate their differences more than their reactions to a life or death moment from the story.

Still don’t think this whole thing is doomed to epic failure?  Then listen to Diana’s ex Steve Trevor who does agree with me and wonders (just like me): “What’s Superman going to do after she breaks it off? It’ll drive him nuts.”

Hell, exactly what we need Superman and Wonder Woman going through a bad breakup.  God, that won’t be pretty.  But it might be cool to read about though.