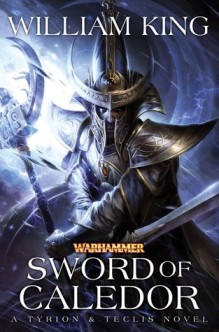 Sword of Caledor by William King

Sword of Caledor is not only a great Warhammer story, but also a worth reading for anyone who loves sword and sorcery affairs.  Well-written, realistic, and gritty yet still possessing a mythical, legendary feel, this second installment of the Tyrion and Teclis series expands upon the excellent foundation the author, Willaim King, built in the first volume.

Taking place a century after Blood of Aenarion, the twins Tyrion and Teclis have developed into gifted and renowned High Elves.  Tyrion is now a legendary warrior, having fought numerous battles and raided the very coasts of the hated Drucchi, as well as growing into a budding politician, who eyes a future focused upon becoming the next Phoenix King.  Meanwhile, Teclis has spent the years developing his sorcerous powers, turning his innate abilities into fabulous skill; the days of his lingering on the edge of death due to continual illness a distant memory, as his health has (at least, in part) been restored through magic and alchemy.

Though their paths have taken these brothers in different directions, they are still very close.  Each keeping the other in his thoughts at all times.  Whenever they can arrange it, the two venture off on epic quests together, taking joy in the other’s company and in aiding their sibling to accomplish yet another personal goal.  And as Sword of Caledor begins, the twins are off on exactly one of these kind of adventures.

Surrounded by the lush wilderness of the jungles of mysterious Lustria, Tyrion and Teclis’ expedition continually faces sudden death.  Whether it be the native wildlife or the deadly lizardmen or the elements themselves, this unexplored wilderness is deadly.  Yet, the twins are undaunted by the danger, for they are searching for the ruins of an ancient Slan city said to be hidden from sight for millennia.  Their goal the fabled sword of Aenarion, which Caledor Dragontamer forged in the early days of the Elves and which has been lost untold ages.  This weapon something a future candidate for the throne of the Phoenix King would love to have in his possession.

Unknown to the twins, however, away in the far north of the world, Malekith the Witch King of Naggaroth stirs.  Too quiet has the accursed son of Aenarion been and for far too long.  Now, though, he has fitted into place the final piece of his grand scheme to unleash his might upon Ulthuan, crush the High Elves once and for all, and take back what has been withheld from his rightful grip.  And, no one can stand against him!

For a sword and sorcery fan, there was a lot to like in this story.  Gritty action.  Amazing world building.  Intriguing heroes.  Devious villains.  Vile plots.  But my favorite element of Sword of Caledor was the characters themselves, who really captured my attention and kept me rooted to my seat.

William King does an excellent job of continuing to mold and develop our heroes Tyrion and Teclis here.  These two have changed dramatically from where book one left them; each a mature elf now with their own distinct and very different personalities, motives, and flaws; the days of their immature, angst ridden youth left far behind.  This story gives them room to showcase that newfound growth, struggle through their own issues, and attempt to rise to the occasion, as threats surround them from beginning to end.  Real evolution in their personalities taking place from chapter to chapter.

Even with that said, I have to admit my favorite sections of the book were those focusing on Malekith and his mother Morathi.  Gaining a glimpse into their demented minds, seeing their bizarre relationship, and discovering more about their motives and desires really made them rise above cookie cutter villain status for me.  Quickly, these two grew into the epitome of grand villains; people whose behavior sickened and disgusted me, but whose reasons for it all almost made me empathize with them.  Talk about scary.

In conclusion, I have to end this review by admitting that the greatest thrill of reading Sword of Caledor was getting to return to this amazing fantasy setting.  The depth of history, unique personalities, intriguing characters, and earth-shattering magic captures my imagination every time I pick up a Warhammer story, creating in me a deep desire to learn even more about this place, meet even more of the legendary figures of this world.  Perhaps this is a feeling only I have about this fantasy setting with its elves, dwarfs, and other traditional fantasy races, but I really don’t believe that.  The brand of gritty sword and sorcery Warhammer offers is timeless in my opinion, and I believe the Tyrion & Teclis saga is a great place for any newcomers to sample its fantastical fantasy flavor.