COVER REVEAL FOR HEMLOCK: BOOK TWO OF THE MANHUNTERS

Bookwraiths is happy to welcome back fantasy author Jesse Teller.  This hard working indie author has been cranking out his own delightfully dark, twisted tales set in the epic world of Perilisc.  And while the previous Tales from Perilisc have been standalone novels, his new series, The Manhunter, doesn’t require a reader to have any knowledge of the previous stories to enjoy this one.  But if you’d like to begin at the beginning take a look at the books below and their chronological order in the overall series. 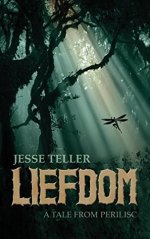 As you can see Hemlock will be last on that chronological list since it is the follow-up to Song, and Bookwraiths is proud to announce its publication date and show off its beautiful cover!

The busiest pirate bay in Perilisc is newly infested with vampires. These monsters will soon overrun the world, but the Manhunters must try to stop them in secret. Agents of the king are hunting the vigilante crew. With one false step, they could all end up at a royal execution.

Reviews of the Tales of Perilisc:

“Jesse Teller is a new voice in Grimdark fantasy, and if you like your books dark and bloody as hell, then he might as well be your new favorite author.”
—Peter Tr, booknest.eu

“Jesse Teller is a very strong author who boldly builds the world he has created with strong themes and no apologies.”
—Dianne Bylo, Tome Tender Book Blog

AUTHOR INFO:  Jesse Teller fell in love with fantasy when he was five years old and played his first game of Dungeons & Dragons. The game gave him the ability to create stories and characters from a young age. He started consuming fantasy in every form and, by nine, was obsessed with the genre. As a young adult, he knew he wanted to make his life about fantasy. From exploring the relationship between man and woman, to studying the qualities of a leader or a tyrant, Jesse Teller uses his stories and settings to study real-world themes and issues.

He lives with his supportive wife, Rebekah, and his two inspiring children, Rayph and Tobin.

2 Responses to COVER REVEAL FOR HEMLOCK: BOOK TWO OF THE MANHUNTERS