FLASHBACK FRIDAY: A HANDFUL OF MEN

Posted on September 8, 2017 by Bookwraiths

Flashback Friday is something I do here at Bookwraiths every once in a while; a time when I can post my thoughts about books that I’ve read in the past. With the hectic schedule of day-to-day life, there never seems enough time to give these old favorites the spotlight that they deserve, but with a day all to themselves, there is no reason I can’t revisit them.

Today, I’ll be taking a look back at another classic  fantasy series by Dave Duncan! 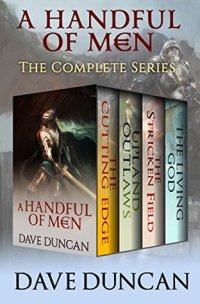 A Handful of Men by Dave Duncan

A Handful of Men is the sequel series to Dave Duncan’s classic fantasy A Man of His Word. While it takes place among familiar environments in the world of Pandemia and involves several of the same characters, this offering is a much different work: deeper worldbuilding, several shades darker, and incorporates many major moral dilemmas for our heroes. It is a more grown-up fantasy, if you will. Please don’t take that to mean this is a depressing work or a grimdark in any way, because it isn’t; Dave Duncan mixing in enough daring-do and humor to keep this series fun and entertaining from first page to last.

Fifteen years have passed since the happily ever after ending of A Man of His Word. People have grown old, matured, traveled along different paths, and the world itself has changed. But even greater change appears to be ahead.

Pandemia is nearing the 3000 millennium. A time when the prophecies say great upheaval and disaster will fall upon the world. Something which historically happen at the turning of every millennium when the Protocal (The treaty which keeps magic out of politics, bars it from use in war.) always seems to be threatened. No matter all that, Rap doesn’t pay much attention to the warning, shrugging it aside as mere fear mongering.

All that changes when a god appears to Rap one night. This divinity assuring our former 5 word wizard that not only are cataclysmic changes coming, but they are all Rap’s fault, and only he can fix them!

From this beginning, an epic saga spirals out. Disaster falling upon Pandemia. Returning faces like Rap and Inos playing huge roles in the attempt to halt the destruction, right old wrongs and find a new equilibrium. These old favorites now changed people of the “elder generation” who watch as younger, fresher faces take major roles in the titanic struggles.

This evolution of beloved characters is one of the most brilliant things about A Handful of Men, and probably my favorite element of its narrative. Dave Duncan able to portray older, realistic versions of the people readers loved from the first series; these “heroes” still themselves, but so very different in fundamental, honest ways, struggling with previous decisions from their youth when they were certain they were making the right choices, but didn’t realize what those choices would lead to in this future.

Rap, in particular, is a wonderful example of the realistic process of transformation which Duncan orchestrates. In the first series, this young stableboy was the optimistic dreamer who wanted to right every wrong, make the world a perfect place for all. But now he has aged, become a bit more jaded, and a great deal wiser. This evolution summed up by a single conversation.

“Why do you not use your powers to help your people, Rap? Why not divert storms from Krasengar, fill the larders single-handed, stamp out disease? You could make your town a paradise.”

“Because . . . Because I think I would produce a nation of idlers and degenerates! I should end up doing all the work and probably gain small thanks for it in the end, when everyone began taking my blessings for granted.”

After a moment he added, “People value happiness by what it costs.”

Needless to say, the young, idealistic Rap would never have uttered such a sentiment. Fifteen years of experience and countless mistakes have made him realize utopia comes with consequences, even in a world fueled by magic; no matter how pristine the motives of the doer.

The other triumph of this series is the fun quota. Dave Duncan never forgets that his readers are devouring his story to escape from reality, and while it is fine for the narrative to contain moral dilemmas and serious issues, this is not a social commentary where every real world issue must be faced and answered in the political correct way. Nope, this is classic fantasy where the goal is to enlighten while entertaining, not beat your reader over the proverbial head with your personal causes at ever turn.

As for any criticisms of the series, I don’t have any. I read this years ago, knew exactly what sort of fantasy story I would experience, and enjoyed it for exactly what it was. So nothing here bothered me in the least.

A Handful of Men is a classic fantasy I always recommend to my friends. Certainly, it would be better read after having first feasted upon A Man of His Word, but it can be enjoyed alone. What I usually emphasize to those who ask is that Dave Duncan is a vivid storyteller with a fine eye toward crafting entertaining stories. There are issues dealt with, quandaries presented, but at the end, a reader knows he/she has been entertained, dazzled, and whisked away from the normal world to a magical place they dearly wish they could remain in. And that, my friends, is all a great fantasy can ever be expected to deliver.