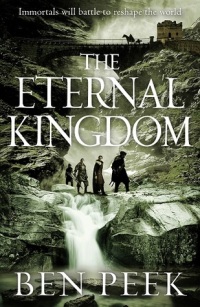 The Eternal Kingdom by Ben Peek

Ben Peek shines in The Eternal Kingdom, the final installment of The Children Trilogy. This story a complex, detailed and imaginative narrative which challenges its readers to keep up, but rewards those who do so.

For those not up-to-date with this series, suffice it to say that the preceding two books have chronicled the birth of a new god and the havoc such an event has unleashed across the world. Wars, untold destruction, and the displacement of whole people merely a few of the consequences of the arrival of this unlooked-for deity.

Caught up in the cascading crash of events has been a cast of very different characters.  Some have survived up to this point, while others have lost their lives.  The returning faces this time around are Bueralan Le, Ayae and Heast, who strive to deal with the newest phase of chaos. Ayae has become the unwilling liaison between the war refugees and the immortals who are attempting to decided what to do about the new divinity. Heast has fallen in with a band of mercenaries as they decide to take up a lost cause.  And Bueralan has the unenviable task of being caught up with the new god, Se’Saera, forced to make choices which might determine the fate of the world.

From these various point-of-view characters Ben Peek weaves a story focused on Se’Saera’s attempt to claim the status of supreme god of the world and what that would actually mean for the world itself. People are hurt; bad things happen to beloved characters; and no one – I mean, no one – is safe from the executioner’s axe.

While I have grown fond of all the characters in this epic tale, what I continued to view as the strength of Ben Peek’s work is the world building. The author having crafted a breathtakingly fantasy setting, filled with history, lore, and all the trapping of civilization. It is a place any reader who loves exotic vistas will adore, because it is just so damn complex, filled to the brim with diversity, and realistic to a fault.

As for any weakness in The Eternal Kingdom, if pressed, I’d point to the irregular pacing. Many times, the narrative just seemed to creep along when a reader would expect it to be traveling rapidly. At other points it whizzed by like a roller coaster when a slower, more methodical approach seemed warranted.  And this failure to set a pace, maintain it, and modulate it did bother me at times.

An emotional series with grey characters, a majestic world, deadly magic, and real consequences, The Children Trilogy has been a wild ride for me as a reader, causing me to ponder some interesting questions and find myself surprised at the answers the story provided me. Certainly, there has been times I was overwhelmed by all the concepts and information thrown at me, but after completing the journey with The Eternal Kingdom, I find it was time well spent, and I’d encourage other fantasy lovers to give Ben Peek’s series a try.

1 Response to THE ETERNAL KINGDOM