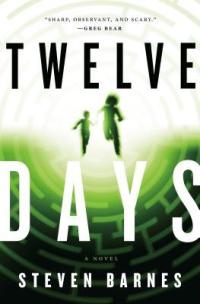 Never having read any story penned by Steven Barnes, I didn’t know exactly what to expect from Twelve Days, especially since it was a paranormal thriller (which isn’t my usual reading genre).  After finishing this fast-paced, taunt narrative, I now have to say I’m sold on this author and am anxious to pick up more from him.

The world is in crisis! The globe held hostage by a terrorist group which threatens (then begins) an apocalypse. Each day a set number of people on a “Dead List” to meet their end. The victims powerful world figures. The rising death toll and lack of understanding on how it is occurring and how to to stop it causing tensions to mount across the globe.

Attempting to live a normal life is journalist Olympia Dorsey. Her whole world until now centered on raising her teenage daughter Nicki and her autistic son Hannibal. Olympia’s deepest desire to discover a cure for her son’s condition or, at least, a way to improve his life.  The mysterious Madame Gupta, head instructor of a school of martial arts, holding out the promise of making Hannibal’s life better.  But is this invitation one of hope or horror?

Lending aid to Olympia is her neighbor (and former lover), Terry Nichols; this ex-Special Forces soldier a father figure for young Hannibal. And while Terry is far from a perfect guy, his strong bond with Hannibal has him reevaluating his choices, contemplating his future (even as he joins his old military friends on a heist) and willing to protect Olympia’s family from the danger which pursues them.

Like all thrillers, Twelve Days is a lightning quick ride through a mine field; the characters rushing headlong from one exciting sequences to another. There is mystery, suspense, full out action, intrigue, and nail-biting sequences mixed with more than expected character development. Steven Barnes’ admixture of a weird supernatural element adding an otherworldly element to an international thriller, but the story of Olympia, Nicki, Hannibal, and Terry grounding this tale in the real world. And for the type of story it was, this book was a fun-filled, emotional ride.

The only criticism I have with the narrative is the global crisis. It was ominous, mysterious, and, unfortunately, undeveloped for my tastes. Perhaps the supernatural element of the crisis is what left me indifferent, since it seemed a bit out of place in a modern thriller, but whatever the specific cause, I never felt the danger of global genocide was very real. Rather, the whole affair seemed more a grand hoax or supernatural conspiracy theory. Perhaps others will find it more compelling, but it just did not work for me.

Twelve Days is a roller coaster thrill ride. The fact that it was built around a family and their love made it even more filling. And if you are a fan of modern thrillers with paranormal twists, then this novel by Steven Barnes is one that you should not miss.