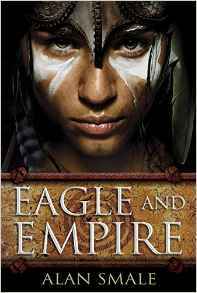 Eagle and Empire by Alan Smale

Eagle and Empire is the stunning conclusion of a detailed, realistic re-imagining of world history. A fast-paced epic adventure which brings to life the nearly forgotten Native American civilizations, and casts a colorful cast of characters into a brutal war between Mongol hordes and Roman legions. Every chapter filled with clash after clash, leaving one breathless as Alan Smale fills the pages with a war for the New World!

For those unfamiliar with the Hesperian Trilogy, imagine, if you will, an earth where the Roman Empire and the Mongol Empire control the Eurasian Continent. Armies of the two empires locked in a never-ending war for control of the globe. This seemingly eternal struggle eventually spilling over onto the untouched North American continent; each empire sending their best to fight for control over this rich, untouched land.

Caught between these two forces are the Native American tribes. People who have had little contact with the rest of the world and find themselves woefully unprepared for the conflict that is coming. Well, all of the people except for those of mighty Cahokia; this powerful city-state having destroyed the Roman expeditionary force sent against it, capturing then befriending its leader Praetor Gauis Marcellinus, who thereafter helps this fierce people form their own legions, even as they advance their technology. All of Gauis’s efforts focused on strengthen the people he has come to respect, aid them in building a mighty “League” of allied tribes, and prepare for the day they must face off against the most destructive armies in the world. A day which has come!

Having followed this story from beginning to end, it is probably obvious that I am a fan. I have thoroughly enjoyed each installment of Alan Smale’s epic, alternate history yarn, but I can unequivocally admit that I have been waiting for this book, desperate to finally see the clash of Roman and Mongol, Native tribes against Native tribes. And I wasn’t letdown in the slightest by this climactic conflict. Alan Smale doing it justice, making me feel as if I was down on the rivers facing down Viking longships or standing upon a battle field staring up at a hail of Mongol arrows or cowering in  trench from Cahokia fliers. This war-to-end-all-wars truly as epic as it sounds, ending in a conclusion which was satisfying in its finality.

As for the characters themselves, all the familiar faces are back. From Gauis to Kimmimela, they still remain, changed due to the consequences of the last book, but still struggling with their own issues and learning to adapt to their new circumstances. And added to them are more than a few new people; individuals whom a reader will either grow to love or hate. Old and new alike facing down a war for survival, one which is filled with brutality and kindness, joys and anguish, hope and despair, victory and defeat.

The only issue I had with this narrative the tendency for the characters themselves to get lost in the sweeping current of events. It was somewhat inevitable that personal issues and character development would take a backseat to the titanic clash of Roman, Mongol, and Native American, but I was disappointed when people I had grown to care for seemed to vanish in the fog of war.

Even with my one criticism, Alan Smale’s Hesperian Trilogy is a masterful work of alternate history, one which amazes with its focus on the intriguing, colorful civilizations of Native Americans. Eagle and Empire bringing this delightful epic to a breathtaking conclusion that surprises yet still satisfies.

3 Responses to EAGLE AND EMPIRE