As most of my friends know, I am a Glen Cook fan, have been since I was a teenager in the 1980s and read The Black Company. That quintessential grimdark fantasy (before there was even the term) blew my mind, turning me into a fan for life. Since then I’ve tried to read everything the man has written. Most of his novels I’ve enjoyed (though I obviously have favorites and some not so favorites), but one of his “underappreciated” series is Darkwar, which was first published back in the mid-80s as a trilogy. 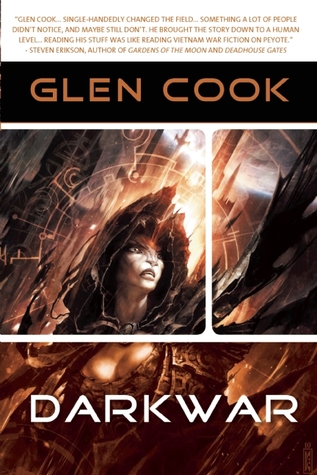 This is a story about Marika: a Meth pup of the Degnan Packstead, living in the longhouse of her dam. (The Meth are a dog-like species whose dominate sex is the females of the race.) In their simple society, Marika and her litter mates live a routine life, concerned with hunting and gathering food as well as staying out of the way of their elders. But while this childhood together does encourage strong bonds between litter mates, the sibling love between Marika and her weaker and cowardly brother Kiblin is an unnaturally strong and committed one, sealed by their sharing of a gift that is as much a curse as a blessing. A gift of magic that each keeps secret from their dam, so as not to attract the attention of the unnatural Silth witches, who kill with their thoughts.

But the two pups need not worry about being discovered, because soon the world starts to change around them. Winters growing colder and longer. The land of snow moving further south from the pole. And Marika and Kiblin overhear the adult meth of the Packstead whispering of invasion by armed and desperate nomads, and worse yet – the return of the Grauken: that most horrible of times when meth feed on meth!

From this familiar set up of medieval civilization and gifted farm child, Glen Cook crafts a powerful tale of a society undergoing massive changes while dealing with the prospect of worldwide cataclysm. But instead of being limited by the standard fantasy tropes, Cook deftly remolds them into new, different patterns, continually surprising you as he evolves Darkwar from a traditional medieval fantasy to fantasy steampunk and then finally a fantasy/sci-fi hybrid.

Something especially refreshing about this novel was that Marika was a powerful, female protagonist. (Not nearly as common back when this was published.) And while she was introduced in the classic “Chosen-One-comes-to-save-the-world” character style, she soon morphs into something else: a “hero” who doesn’t behave as one but isn’t really an anti-hero either. A more appropriate label for Marika would be that she is the physical representation of societal change; a force of nature itself that destroys and creates in equal turns as it sees fit. There is no animosity in Marika’s acts, merely decisions that are caused by the operation of cause and effect as one decision begins a chain reaction which results in more changes occurring in a rapid progression until everything is now different. Thankfully, however, Cook mixes in enough tender and touching moments to keep Marika from losing all semblance of her humanity — though she is a difficult character to really love.

If all that doesn’t sell you on giving this one a try, then let me attempt to do so in another way.

I re-read Darkwar a couple years ago (It having been more than a decade since I read it last), and, after all those years, the book touched me more deeply now than it did when I was younger: Certain societal changes and obstacles of Marika and her world eerily mimicking our own ongoing problems. Since then I’ve found myself wondering many times “How would Marika deal with this or that?” And when a fantasy story touches me that deeply, it had to have done something right.

If you’d like to give this little known fantasy and sci-fi genre bender a try, you can buy Darkwar