There are many, many great speculative fiction works out there.  Too many to list really.  If we include into that number all the anthologies, novellas, and short stories the number rises astronomically high.  But there are a few we all keep at the tip of our tongue; the ones we tend to recommend to new readers, whom we are attempting to convert into speculative fiction lovers.

Like a lot of people who have been reading SFF for decades, my personal recommendation list includes many authors who have been around since I began reading ages ago.  People like J.R.R. Tolkien, Frank Herbert, Isaac Asimov, Glen Cook, Barbara Hambly, Stephen King to name a few.  And, yeah, I always mention those individuals, but, more and more lately, new friends want the names of newer books, more current authors.  So, in an attempt to adapt to changing times, I’ve had to add a new group of names to my recommendations, and this list is all about more current authors I try to steer new readers toward.

Certainly, the authors below run the spectrum from grimdark to comedic, from epic to swashbuckling.  And that is by design.  I try to give those who ask a lot of different choices, so they can, perhaps, find one which appeals to their unique tastes.  Hopefully, everyone who reads this will add a few authors to the list, because, at the end of the day, we all need help finding all the great books out there.

10. Kings of the Wyld by Nicholas Eames

Clay Cooper and his band were once the best of the best — the meanest, dirtiest, most feared crew of mercenaries this side of the Heartwyld.

Their glory days long past, the mercs have grown apart and grown old, fat, drunk – or a combination of the three. Then an ex-bandmate turns up at Clay’s door with a plea for help. His daughter Rose is trapped in a city besieged by an enemy one hundred thousand strong and hungry for blood. Rescuing Rose is the kind of mission that only the very brave or the very stupid would sign up for.

It’s time to get the band back together for one last tour across the Wyld.

The difference between a hero and a killer lies in the ability to justify dark deeds. But this is the Age of Ruin. And there are no heroes…

Five hundred years ago, the world was destroyed in the celestial Godswar. Seeking to throw off the shackles of the deities who created them, a cabal of mages rose up and made war upon the Gods. Though they won out, it was at a great cost: the ensuing cataclysm brought forth the Age of Ruin to the world.

Five hundred years later, the world limps on, seemingly winding down to an inevitable end. Dystopian city states have arisen, each presided over by one of the Magelords who first made war.

Corrupted, near-immortal, and far too powerful, those wizards who once sought to free the world now make war upon each other, while the helpless populace limp on from day to day.

Into this blighted world, steps Davarus Cole, a boy obsessed with notions of heroism and adventuring, who burns to do great deeds. One night, in a reckless act, Cole gets himself into a brawl with the authories. He quickly finds himself sent away from the city, where the world still groans from the ancient cataclysm, and the corpses of Gods lie deep beneath the bedrock, leaking wild, uncontrolled magic into the world.

8. The Emperor’s Blades by Brian Staveley

The circle is closing. The stakes are high. And old truths will live again . . .

The Emperor has been murdered, leaving the Annurian Empire in turmoil. Now his progeny must bury their grief and prepare to unmask a conspiracy.

His son Valyn, training for the empire’s deadliest fighting force, hears the news an ocean away. He expected a challenge, but after several ‘accidents’ and a dying soldier’s warning, he realizes his life is also in danger. Yet before Valyn can take action, he must survive the mercenaries’ brutal final initiation.

Meanwhile, the Emperor’s daughter, Minister Adare, hunts her father’s murderer in the capital itself. Court politics can be fatal, but she needs justice. And Kaden, heir to an empire, studies in a remote monastery. Here, the Blank God’s disciples teach their harsh ways – which Kaden must master to unlock their ancient powers. When an imperial delegation arrives, he’s learnt enough to perceive evil intent. But will this keep him alive, as long-hidden powers make their move?

7. Half a King by Joe Abercrombie

Betrayed by his family and left for dead, Prince Yarvi, reluctant heir to a divided kingdom, has vowed to reclaim a throne he never wanted.

But first he must survive cruelty, chains and the bitter waters of the Shattered Sea itself – all with only one good hand. Born a weakling in the eyes of a hard, cold world, he cannot grip a shield or swing an axe, so he has sharpened his mind to a deadly edge.

Gathering a strange fellowship of the outcast, he finds they can help him more than any noble could. Even so, Yarvi’s path may end as it began – in twists, traps and tragedy…

Years ago, the city of Bulikov wielded the powers of the Gods to conquer the world. But after its divine protectors were mysteriously killed, the conqueror has become the conquered; the city’s proud history has been erased and censored, progress has left it behind, and it is just another colonial outpost of the world’s new geopolitical power. Into this musty, backward city steps Shara Thivani. Officially, the quiet woman is just another lowly diplomat sent by Bulikov’s oppressors. Unofficially, Shara is one of her country’s most accomplished spymasters — dispatched to investigate the brutal murder of a seemingly harmless historian. As Shara pursues the mystery through the ever-shifting physical and political geography of the city, she begins to suspect that the beings who once protected Bulikov may not be as dead as they seem — and that her own abilities might be touched by the divine as well.

5. The Warded Man by Peter Brett

As darkness falls after sunset, the corelings rise—demons who possess supernatural powers and burn with a consuming hatred of humanity. For hundreds of years the demons have terrorized the night, slowly culling the human herd that shelters behind magical wards—symbols of power whose origins are lost in myth and whose protection is terrifyingly fragile. It was not always this way. Once, men and women battled the corelings on equal terms, but those days are gone. Night by night the demons grow stronger, while human numbers dwindle under their relentless assault. Now, with hope for the future fading, three young survivors of vicious demon attacks will dare the impossible, stepping beyond the crumbling safety of the wards to risk everything in a desperate quest to regain the secrets of the past. Together, they will stand against the night.

4. The Final Empire by Brandon Sanderson

In a world where ash falls from the sky, and mist dominates the night, an evil cloaks the land and stifles all life. The future of the empire rests on the shoulders of a troublemaker and his young apprentice. Together, can they fill the world with color once more?

In Brandon Sanderson’s intriguing tale of love, loss, despair and hope, a new kind of magic enters the stage — Allomancy, a magic of the metals. 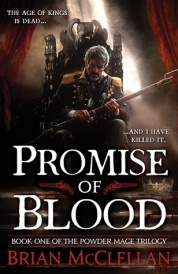 3. Promise of Blood by Brian McClellan

It’s a bloody business overthrowing a king…
Field Marshal Tamas’ coup against his king sent corrupt aristocrats to the guillotine and brought bread to the starving. But it also provoked war with the Nine Nations, internal attacks by royalist fanatics, and the greedy to scramble for money and power by Tamas’s supposed allies: the Church, workers unions, and mercenary forces.

Stretched to his limit, Tamas is relying heavily on his few remaining powder mages, including the embittered Taniel, a brilliant marksman who also happens to be his estranged son, and Adamat, a retired police inspector whose loyalty is being tested by blackmail.

But when gods are involved…
Now, as attacks batter them from within and without, the credulous are whispering about omens of death and destruction. Just old peasant legends about the gods waking to walk the earth. No modern educated man believes that sort of thing. But they should…

Falcio is the first Cantor of the Greatcoats. Trained in the fighting arts and the laws of Tristia, the Greatcoats are travelling Magisters upholding King’s Law. They are heroes. Or at least they were, until they stood aside while the Dukes took the kingdom, and impaled their King’s head on a spike.

Now Tristia is on the verge of collapse and the barbarians are sniffing at the borders. The Dukes bring chaos to the land, while the Greatcoats are scattered far and wide, reviled as traitors, their legendary coats in tatters.

All they have left are the promises they made to King Paelis, to carry out one final mission. But if they have any hope of fulfilling the King’s dream, the divided Greatcoats must reunite, or they will also have to stand aside as they watch their world burn… 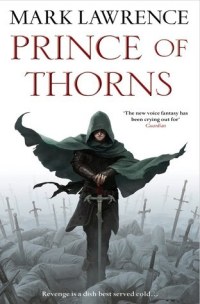 1.   Prince of Thorns by Mark Lawrence

Before the thorns taught me their sharp lessons and bled weakness from me I had but one brother, and I loved him well. But those days are gone and what is left of them lies in my mother’s tomb. Now I have many brothers, quick with knife and sword, and as evil as you please. We ride this broken empire and loot its corpse. They say these are violent times, the end of days when the dead roam and monsters haunt the night. All that’s true enough, but there’s something worse out there, in the dark. Much worse.

From being a privileged royal child, raised by a loving mother, Jorg Ancrath has become the Prince of Thorns, a charming, immoral boy leading a grim band of outlaws in a series of raids and atrocities. The world is in chaos: violence is rife, nightmares everywhere. Jorg has the ability to master the living and the dead, but there is still one thing that puts a chill in him. Returning to his father’s castle Jorg must confront horrors from his childhood and carve himself a future with all hands turned against him.

That is my list.  What books/authors would you have included?  Let us all know, because we might not ever hear about them otherwise.