INDIE WEDNESDAY –THE BOW OF DESTINY 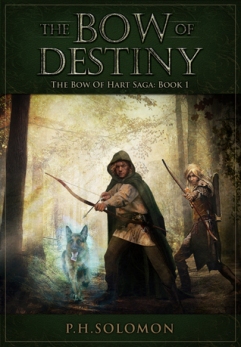 The Bow of Destiny by P.H. Solomon

P.H. Solomon’s book was one I initially overlooked last year.  However, after being introduced to it through a blog tour, then enjoying Mr. Solomon’s two prequel short stories,  I was intrigued enough to want to see where he was going with this story and hoping it would be exactly what the doctor ordered to satisfy my classic fantasy craving.  And while I had a few issues with the narrative, overall, it was a very solid debut with room to grow into a fan favorite.

As the tale begins, we are introduced to Athson; a young man haunted by a tragic past.  His family lost to him in a horrible massacre.  His trauma from the experience a lingering curse, one which cripples him with psychotic episodes where his dead family appears to him, speaks to him, and he answers them.  The past and the present inseparable to his mind. And though the elves Heth and Cireena lovingly reared him, and though his close friend and fellow ranger Gweld always is there for him, it is only the potion dubbed Soul’s-ease which stops Athson’s fits from completely overwhelming him.

On this occasion, our young ranger is on a solo scouting mission when he realizes he has left the ranger station without his potion.  The phantasms quickly materializing before his eyes, demanding answers, offering advice, and refusing to leave him be.  So when an unknown visitor comes to Athson’s campsite, he isn’t quite sure if this person is real or imagined.  But when a package is left for him and it turns out to be very real, Athson is amazed by how the bow string and message inside changes his whole life!

Not knowing exactly what to expect from The Bow of Destiny, I have to say it was a pleasant surprise.  Definitely, it is a traditional quest-type tale with lots of traveling, introduction of new characters, and the inevitable formation of a quest group — with all the personal dynamics which go along with strangers coming together to accomplish a mission.  But Mr. Solomon has put his own unique twist on this sort of epic fantasy, which causes Bow to stand apart from other stories of its kind.

The main strength of this narrative is the unique character of Athson.  His psychotic episodes, where he interacts with apparitions from his past after missing a few doses of Soul’s-ease, are exceedingly well crafted.  The very realistic look at a person attempting to live a normal life while dealing with a mental health issue quite refreshing.  Athson is no chosen one or superhuman by any account.  Yes, he has a mission, a quest, but his time is spent dealing with his personal issues.  If he doesn’t take his potion at the correct times his “fits” begin again, but real life gets in the way of him always managing his medication properly: he is running for his life, dealing with horrendous events, or just hopes that this time when he stops the visions will finally disappear forever.All of it making our protagonist uniquely human and exceedingly compelling.

Mr. Solomon also does an excellent job of juggling all the narrative elements without allowing any one of them to overwhelm the others.  There is lots of world building going on throughout, numerous background lore about people, places, and things.  The environment around our characters is described in loving detail; atmosphere created.  Emotions are conveyed, feelings shared, and motives shaped.  And while all of this is going on, the journey itself races along from adventure to adventure, as Mr. Solomon never takes his foot off the accelerator for long, keeping this fantasy racing toward its conclusion.

The only complaints I had with the novel revolved around certain story telling devices Mr. Solomon used.  For instance, there are frequent changes in point-of-view characters throughout the narrative.  These shifts sudden, jarring at times.  No break in the narrative to alert you that a new character is at the helm.  Many times, I would not realize a new character was speaking until later in the scene, something which did bother me.  Also, the way certain people would appear in the story, be built up as important, then totally disappear for chapters at the time (other than their name being mentioned) did bother me.  I enjoy becoming emotionally engaged with characters — even minor characters — so to have new faces pique my interest then vanish was a bit of a letdown for me personally.

All in all, The Bow of Destiny was a good book, which set the table for an interesting story going forward.  I can see many readers thoroughly enjoying this fast-paced, quest narrative with its flawed main character in Athson; it definitely is a mixture of the classic fantasy past with new ideas mixed in.  And look at that cover, guys.  You have to admit that is one of the best fantasy covers you’ve seen lately.

5 Responses to INDIE WEDNESDAY –THE BOW OF DESTINY