Today, I am very excited to host P.H. Solomon, author of the The Bow of Hart Saga, to Bookwraiths. His debut novel, The Bow of Destiny, is an epic fantasy in the classical style, which I was happy to review yesterday.  (You read the review, right?)  And Mr. Solomon is such a gracious guy he was nice enough to write a guest post for all of us.  So enjoy!

The Bow of Destiny depicts conflict between good and evil as is common in epic fantasy. But what is not specifically in the series to this point is the basis of the 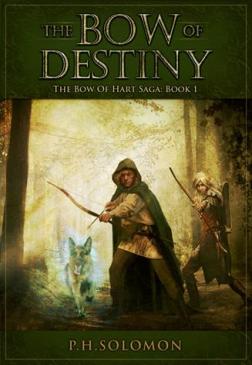 conflict. While my prequel short story, What Is Needed, shows something of the conflict in the demise of most of the mystic order of Withlings, the conflict is much older. But to better grasp this history for the book, an understanding of Withlings is necessary which introduces basic viewpoints of characters – including those who hold greater power in the world of Denaria.

Withlings are mystics who worship and serve the deity of Eloch. By the practice of their faith, Withlings are able to perform miracles such as healing, move from place to place or utter very accurate prophecies. These are but a few examples of Withlings’ abilities but these are not dependent upon their inherent powers but those of Eloch. The frequent saying among Withlings is, “What is needed is given.” This means that they trust Eloch implicitly to provide what they need at any moment which can include miraculous actions. Often, Withlings will speak – or not – based on their sense of what Eloch wants them to do.

So, Withlings must practice mystical ability to “be with” Eloch in order to know what they must do. Withlings consider this a form of “listening” and it becomes the basis of their life. Sometimes, they may know much but be withheld from taking any action, something very hard to do and a reason they practice mystic discipline.

To Withlings, there is only Eloch as the true deity and it seems to be so. However, there is also the dragon Magdronu. What does not come into this series are the details of how Magdronu came into conflict with Eloch and how he got the worst end of that conflict to be cursed into the form of a dragon.

Magdronu takes actions that are often typical for an “evil” character. However, he considers himself to be a dualistic counter-point to Eloch, a co-equal deity who has been kept from his natural prime position in the world as light and dark ebbs and grows. So to Magdronu, his conflict with Eloch arises from being withheld from taking his true place and that everything is out of balance as a consequence. To Magdronu, he must rise at some point and he seems “evil” but this is really just his nature and is no less valid than “good” on the part of Eloch.

So while Magdronu sees himself kept out of the balance of nature, he is stuck in a position of being cursed and unable to gain his prime position. Thus Magdronu must find a way to rise through the force of his will and the use of his magic. To this end, Magdronu sees Withlings as a force that thwarts him and he has tried to wipe them out as a way to gain influence.

But the question remains, how is Eloch able to hinder Magdronu so thoroughly? Thus we end up with a dwindling order of mystics, a prophecy against Magdronu, a mythic bow and someone intended to possess and use the Bow of Hart. Such is the background for the main character, Athson, who must discover his destiny.

Want to discover more about The Bow of Destiny? Here’s a list of other interviews and appearances I’ve made both on blogs and internet radio shows.

Beyond the Cover on Rave Waves

And one of my favorites on C. S. Boyack’s Lisa Burton Radio (which is actually a great blog series).

Where you can find the book:

P. H. Solomon lives in the greater Birmingham, AL area where he strongly dislikes yard work and sanding the deck rail. However, he performs these duties to maintain a nice home for his loved ones as well as the family’s German Shepherds. In his spare time, P. H. rides herd as a Computer Whisperer on large computers called servers (harmonica not required). Additionally, he enjoys reading, running, most sports and fantasy football. Having a degree in Anthropology, he also has a wide array of more “serious” interests in addition to working regularly to hone his writing. The Bow of Destiny is his first novel-length title with more soon to come.