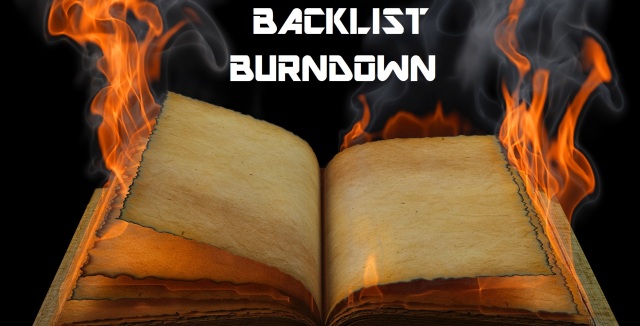 Backlist Burndown is a monthly meme hosted by Lisa from Tenacious Reader where you read one book from your backlist every month, then share your review of it the last Friday of that month.  And, finally, I’ve gotten my reading (and reviews) into some semblance of order, so I can start participating in this great meme. 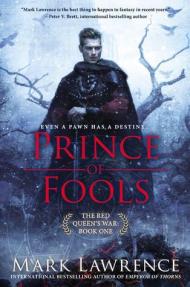 Prince of Fools by Mark Lawrence

The Broken Empire trilogy stands as a seminal work in the fantasy genre, a grimdark extravagance which turned many a head.  Jorg Ancrath an unforgettable protagonist who changed the genre forever in my mind.  Mark Lawrence’s brilliance as a storyteller a revelation.  But like all stories, no matter how great, Jorg’s personal journey came to an end, and fans of the series cried out for more!  This fascinating post-apocalyptic world too glorious, too rich with untold stories to leave just yet.

Well, thankfully, Mr. Lawrence himself wasn’t ready to depart the Broken Empire.  The Red Queen’s War returning to this mesmerizing place, introducing a new, very different main character in Prince Jalan Kendeth, third son of the Red Queen’s third son: a liar, gambler, womanizer, cheat, and — above all else — a coward!

No matter Prince Jalan’s intentions of spending his life carousing the bars and gambling dens with his friends, leaping from ladies’ windows while evading enraged brothers, and attempting to make the most of being the tenth in line to the throne, he cannot escape the dark sorcery and momentous machinations permeating the Broken Empire.  His destiny to become an integral part of the Red Queen’s War: the lifelong struggle his grandmother has been waging against hidden foes bent on the destruction of the whole world.  The conflict now supposedly escalating into into an undead army being raised by the Dead King.  But Jalan finds it all incredibly boring and tedious.  His grandmother’s constant speeches about it all mind numbing.  Rather he views it all as telltale signs the old crone is on her last leg, nearly ready to go ahead and graciously die already.

But then fate intervenes in the Prince’s life.  A boring evening at the opera turning into a near death experience, as Jalan barely escapes being caught in a devastating spell cast by the Red Queen’s mysterious (and seemingly invisible) witch the Silent Sister.  When the magic goes awry, it binds Jalan to a muscle-bound northman named Snorri ver Snagason, who is on a quest to the icy north to rescue his family and confront the minions of the Dead King.  So, naturally, Jalan attempts to get the hell away from the lunatic as fast as possible — only to find the spell will kill him if he does not stay close to his new companion.

Forced to “volunteer” for Snorri’s suicide mission, Jalan finds himself traveling across the Broken Empire, confronting many familiar faces from Mark Lawrence’s previous trilogy and attempting to runaway from all the dangers he stumbles into.  Each step into the north leading him closer to an epic confrontation with the most heinous foe.  More importantly, each step means Jalan is running out of time to break the spell, get the hell away from Snorri, and return home to the inviting arms of the DeVeer sisters — all of them!

As much as I was enraptured by Jorg Ancrath’s tale in The Broken Empire, I have to go ahead and confess that I much prefer reading about Jalan.  A rakish playboy with an easy charm and a witty comment for any situation he instantaneously becomes the guy you’d like to hang out with and drink a few beers, go gambling with, or watch some fights.  No, you would never trust him with your money or your honey, but the guy is damn likable.  Even his penchant for getting the hell out of the way of danger is more a foible which is understandable and clever than a horrible character trait.  (I mean, who wouldn’t want to run the other way if you were facing certain death.) So while the book had a much different tone than Prince of Thorns, it worked amazingly well for me, because of Jalan.

For those more concerned with how Jalan’s tale and the Red Queen’s War fit into the Broken Empire saga, I have to assure you Mr. Lawrence does an outstanding job harmonizing the two: Jorg’s personal journey meshing seamlessly with the Red Queen’s War, separate and distinct yet part of the same overarching struggle.  He is even able to find entertaining, fitting ways for Jalan and Jorg to nearly crossing paths on a few occasions without it impacting the previous trilogy.  Our cowardly prince having some page turning encounters with prominent figures from The Broken Empire.  Jalan’s humor always front-and-center, turning the bleakest, most depressing Ancrath moment into sheer comedic genius.  This whole story line gifting readers with some of the best moments in the book by far.

Even with all that being said though, this isn’t really a “happier” story than Jorg’s tale.  Here we have the fate of Snorri’s family and the sense of impending doom from the Dead King’s minions filling the majority of scenes.  Sure, there is more humor and camaraderie between Jalan and Snorri than anyone in Thorns, but these are only brief interludes before shadows close back in, smothering the tale in grimdark gloom — which might or might not be a bad thing according to your perspective.

All of which is a perfect segue into my main criticism of Prince of Fools: the journey.  As I mentioned, I loved Jalan, really warmed to his humor and his rakish ways, but once he leaves his homeland to journey north with Snorri, there were many times were I grew horribly bored with it all.  Not the times where Jalan is crossing paths with Jorg or other Thorn alumni, but when the companions are traversing these seemingly endless, totally dull countries, sailing across oceans, or interacting with the Viking-esque northmen,  nothing much happens other than Snorri and his tragic history being introduced.  Yes, my heart wept for this man and his lost family, but I kept asking myself when were we going to get to see Jalan do something fun again.  Maybe that is shallow of me, yet it is exactly what I was thinking up until the rousing ending, which saved the second half of the book for me.

On the whole, Prince of Fools is a great introduction to an amazing new character in Jalan.  Mr. Lawrence having now created two, stellar protagonists who are absolutely nothing alike except in their ability to make readers fall in love with them.  Definitely, new readers should probably start their journey through the Broken Empire with Jorg’s tale in Thorns, but if the more bloodthirsty approach of my favorite Ancrath is too much, you could hop on Jalan’s journey without missing too much.  Just understand going in that Snorri might make you snore and that the journey does seem like it is to the ends of the earth.