MY FAVORITE SERIES WITH POST-APOCALYPTIC SETTINGS 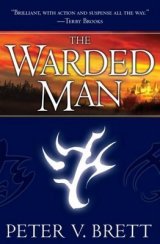 Peter Brett’s post-apocalyptic world of demons and defensive wards really caught my attention when I finally read it.  Naturally, my favorite part was learning about the constant battle between the otherworldly demonic hosts and the remnant of humanity, who has learned to hide behind defensive wards as they have developed a new society after the destruction of the ancient world.   First book is great.  The second left me a bit perplexed, and the reviews I’ve read of book three have listed numerous problems, but I still love the setting for these stories.

Brutal.  Monotone.  Eerie.  Depressing.  I could go and on with the descriptive terms for this heart-breaking story of a father-son duo attempting to survive in a harsh post-apocalyptic world.  No, it isn’t a novel I intend to ever read again, but the emotional impact it had on me when I did read it was palpable and nearly spiritual in nature.  And the terrible setting is what made it so breathtakingly real and painfully realistic.

A man, a goat, a baby, and a singing sword have to cross a demon haunted land.  Why they are doing this, and where they are going is a mystery.  You also don’t know who exactly this knight is and why he might be important.  The demons here are dangerous and frightening from the beginning however; their warped, inhuman thoughts, desires, and internal squabbling a real joy to read about.  All of these elements meshing to make this post-apocalyptic series one of my current favorites. 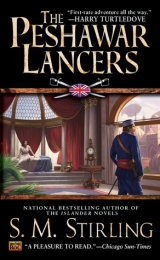 In the 1870s, a comet shrieked into the atmosphere, broke into numerous pieces before crashing to earth in a line from Russia to the United States.  The resulting destruction froze technological advancement in its tracks and set civilization back hundreds of years; the immense destruction wiping out whole nations before triggering a global winter which nearly destroyed mankind altogether.  Now, in the 21st Century, the British Empire has survived after relocating to India, where it faces off against several other surviving countries.  All of that meaning this is an awesome post-apocalyptic world to read about.

A novella series which has captured my attention and held it, making me want more.  Here, the technological modern world was destroyed by the judgment of God, who sent his angels to guide and rule over the broken remnants of humankind.  But what are the angels really?  Why do they fight wars against one another?  And what purpose did the human knights serve in the armies of their angelic creators.  Read the novellas and find it all out.  Can’t recommend this one enough.

A grimdark fantasy series set in a post-apocalyptic medieval-type world.  The destruction which created this lost and gloomy place was a human crusade against the very gods.  Mankind taking up arms against the divinities, waging a war which they ultimately won.  Now, the world is slowing dying.  The absence of the gods sucking the very life out of the land itself.  Magic itself evaporating.  And while everything goes to hell, the remaining mages of the world play their games of power, even as they desperately excavate the remains of the fallen gods for magical essence to fuel their struggles.

4. CHRONICLES OF THE PNEUMATIC ZEPPELIN

A steampunk world filled with black powder guns, lighter-than-air flying machines, underwater cities, and striped Martians.  Well, at least, a few half-Martians here and there.  This fantastical place having grown up upon the ruins of the modern world after an invasion by Martians destroyed everything which came before — including electricity.  And the swashbuckling crew of the Pneumatic Zeppelin takes its readers on a grand tour of all the amazing steampunk sights.

My favorite grimdark of all time is also the one with the best post-apocalyptic world.  Honestly, this place is a treasure trove of ancient artifacts from a modern world destroyed by nuclear war.  What makes it especially entertaining is how creative Mark Lawrence is with the leftover remnants of the past; every day items and terminology we are all familiar with having been twisted into very different things.  Each revelation about this place yet another reason to keep turning the pages and follow along behind out tour guide: Jorg Ancrath.

This genre blender has so much going on in its pages that it really defies categorization.  Part fantasy, part western, part science fiction, part post-apocalyptic.  The Dark Tower mixes themes from them all, but the worlds which Roland Deschain and his Ka-Tet journey through are pure post-apocalyptic gold.  I mean, when the world has moved on that is just another way of saying it disappeared in a cataclysmic upheaval, right?

I’m ending my list with my favorite post-apocalyptic fantasy world ever: Darwath.  Here the medieval society is overwhelmed by the rising of the Dark.  These subterranean creatures rising at night and devouring all humans they can discover.  The story revolving around a group of survivors attempting to flee before their hunters to the ancient refuge of Dare, where they hope to discover a way to drive the Dark back underground forever.  An amazing tale of discovery, ancient mystery, and adventure, set within a very realistic post-apocalyptic world.   Everyone should try it.