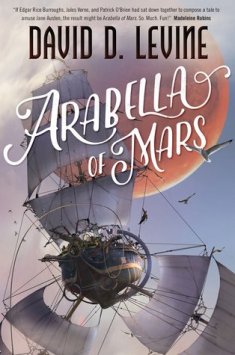 Set on an alternate earth where Isaac Newton discovered the means for man to reach the stars in the late 1600s, Arabella of Mars captures the romantic, optimistic feel of classic science fiction.  The environment of 1800s English society adding an elegant veneer to a thoroughly spacefaring journey of self-discovery by our heroine, Arabella Ashby of Mars!

When human’s venture forth into space, Mars is naturally the first planet explored.  Mankind discovering that not only is its atmosphere breathable, but it has a native tree vital to future interplanetary travel as well as crab-like denizens who are able to be communicated with and dealt with in the same manner as other indigenous races in the British Empire.  This revelation leading to the settlement of the Red Planet: colonies, plantations, and businesses springing up around its surface.  Assuredly, the brave colonists who settle this new world are still English men and women, but they are also frontiers people, of a sort, who find themselves slowly changing and adapting to their new environment: physiologically and socially; their years upon the fourth planet from the Sun, living side-by-side with the natives, turning them into a new class of Brits.

Arabella is a perfect example of this new citizen of Mars; she is audacious, curious, adventurous, and far more attached to Mars than her true home back on Earth, which means she is thoroughly unlady-like by her mother’s good English standards.  The fact that Arabella has also inherited her father’s fondness for science and automatons as well as a desire to adopt the customs of the Martian “natives” results in her mother moving Arabella back to London, England to straighten her out before she is too “wild” for any man to marry.

Fitting into London society in the early 1800s is not easy for our Martian transplant however.  Her independent nature, improper manners, and quick wits more problematic than helpful in this new environment.  And it is only when tragedy strikes and danger comes to one she loves that Arabella discovers a use for her “undesirable” qualities, as she disguises herself as a man and proves herself on a lengthy journey back to Mars’ familiar climes.

Sometimes I pick up a novel with a lot of expectations.  My mind already imagining all the amazing characters, places, and mysteries I’m about to experience.  And, generally speaking, few of these highly anticipated, must reads ever live up to my personal hype for them.  Thankfully, the reverse is also true.  I’ve found that books which I have no preconceived notions about are usually more enjoyable and fun.  Arabella of Mars fitting snugly into the latter category.

Now, don’t take that admission to mean that I was expecting bad things from this novel.  Rather, I had zero expectations.  My opinion a blank book to be filled in.  So when David D. Levine delivered an entertaining coming-of-age tale with an intelligent, strong woman as the lead, set in a masterful world with Newtonian Bubble Ships (Or Marsmen, if you prefer), interstellar weather, steampunk-like automatons, and cool Martians, I was happily surprised.  All these familiar elements deftly juggled by the author to maximize the entertainment, even if none of them were particularly new.  That last statement not a thinly veiled criticism of the narrative, but a statement that sometimes the familiar is refreshing and comforting, allowing one to sit back and just enjoy the time away from the troubles of reality and have fun.  Arabella of Mars being that sort of “escapist” vehicle for me.

It all comes down to whether you, my faithful (or casual) reader, might enjoy this novel though.  (I mean, that is why you are reading the review, right?) This question always a tough one to answer.  One that I nor any other reviewer can truly prophesize with perfect accuracy, because of everyone’s different tastes and differing needs.  But since I do not wish to disappoint, I will hazard a guess that anyone who enjoys heroine coming-of-age stories or fans of Victorian-esque science fiction or even YA sci-fi would find a lot to like here.  I did, which isn’t always a guarantee of your enjoyment, but it is the only measure I have to base my prediction upon.

Giveaway time again! With thanks to the publisher, one print copy of Arabella of Mars is available to all residents of the US and Canada.  To enter, all you have to do is visit the a Rafflecopter giveaway before 11:59pm Eastern time on Wednesday, July 27, 2016.