DOWNFALL OF THE GODS

Downfall of the Gods by K.J. Parker

Downfall of the Gods is a novella which attempts to be a clever and witty portrayal of the antics of a pantheon of gods; a pantheon which is very similar to the ancient Greco-Roman deities. No, the divine names are not the same as in the Greek myths, but it is fairly obvious who each divinity is here: their child-like petulance, mind-numbing mischief, and bipolar personalities giving them away. But while many immortal beings strut across the stage, the real star of this show is the musings of one goddess, detailing her philosophical journey of discovery regarding religion.

Artemis . . . (Ahh. Well, she isn’t ever called Artemis, but that is who she appears to be, so I’m going to call her that.) So, anyway, Artemis begins this story by walking into her temple after a long, hard day of being a prostitute and finds that a rather important member of her divine flock is prostrating himself before her huge statue, begging for forgiveness. It seems he has plotted and killed his close friend, who slept with his wife and constantly mistreated him, but now he has truly repented of his evil deed, wishes he could take it back and is begging for forgiveness. There is a problem: Artemis has no intention of forgiving him, because the murdered individual was her favorite musician!

Actually, I misspoke, because there is another, even more pressing, problem. You see, no matter her divinity, Artemis has rules she must abide by. Divine covenants forged between the gods and their human followers that provide for forgiveness upon repentance. And no god or goddess is above these rules, which is why Artemis is soon summoned before her father!

Needless to say, daddy Zeus isn’t happy with his headstrong daughter. Their discussion (and Artemis’ inner monologues) detailing what is expected of her, the serious drawbacks of godhood and the rather uselessness (at least, in Artemis’ eyes) of mankind’s devotion to god(s) in the first place.

Eventually, however, (after much philosophical arguments) a compromise between Zeus and Artemis is brokered: the goddess agreeing to grant forgiveness to her follower IF he completes a quest to the halls of the dead and brings back his victim’s soul. A journey which Artemis will accompany him on, providing her divine guidance and support — whenever she feels like it.

Thereafter, the tale zigs and zags between Artemis’s interactions with her divine family (Who appear to be about as worthless as she continues says they are.) and her human follower (Who is about as blindly devoted to her as anyone could be.) Each scene serving more to provide reasons to pontificate on the ridiculous of religion than to actually create a compelling narrative or develop realistic characters. In fact, nothing terribly exciting happening throughout (other than philosophical musings on religion) until the rather ironic ending is sprung like a mouse trap upon the unsuspecting (or, should I say, the suspecting) audience.

If one was to look for strengths and weakness in this novella, the strength would undoubtedly be the goddess character herself. She is a very fitting, well-crafted narrator, who muses upon and bitches about religion, faith, and the inherent limitations of any divinity upon the fate of the world. And through the uncovering of her personal inadequacies and her ridiculous arguments, the story develops from a rather quest oriented tale to a full blown religious satire, or religious parody, which does its best to encompass all religions in its virulent mockery.

As for the weakness, it would be the fact that this is a religious 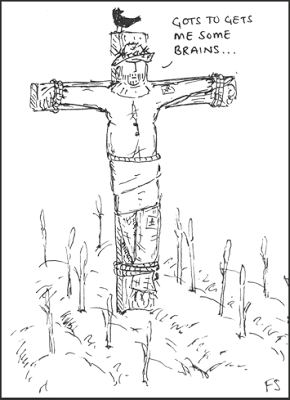 parody. Whether you are a believer in some form of religion or not, no doubt, we can all concede that the exercise of faith is a very personal experience which people become very attached to and do not enjoy being ridiculed. Anytime a person makes light of, mocks, or labels a person of religious belief as ignorant or illogical for feeling a certain way, I personally find it in poor taste. It really is the same as telling a joke about minorities or same sex couples or over weight people or anyone else, and to me, it isn’t clever or witty or funny in the least. And here, the author spends over a hundred pages making arguments regarding the idiocy of religion; every epiphany of the characters further espousing the useless of god(s) and the need for mankind to cast aside such illogical beliefs in divinities. Perhaps some part of the narrative in this vein could be understood, but after finishing this novella, I felt as if I’d spent an hour reading a sermon for atheism rather than a fantasy story.

All in all, Downfall of the Gods is a fine read IF you undertake it understanding what it is. This is a religious satire, a religious parody, which definitely has an agenda to cast religion in all its myriad forms as illogical, adolescent, and ridiculous. Nothing wrong with that as long as you agree with that form of discrimination. If, however, you — like me — are searching for a rousing fantasy adventure story to excite and awe you, then this one is probably something you should skip.

I received this book from Subterranean Press and Netgalley in exchange for a fair and honest review. I’d like to thank both of them for allowing me to receive this review copy and inform everyone that the review you have read is my opinion alone.

3 Responses to DOWNFALL OF THE GODS