BATMAN: THE CITY OF OWLS 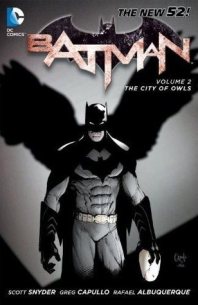 Batman, Vol. 2: The City of Owls by Scott Snyder

Not being a dedicated Batman fan, I have to admit being blown away when I finally got around to reading Batman: The Court of Owls.  The story really captured everything I’ve always loved about the Dark Knight, gave him some top tier enemies, and showed Bruce struggling to survive.  So when I finished volume 1 of the story line, I immediately went out and found a copy of volume 2.

After reading The City of Owls, all I can say is “Damn that was good!”

While the story is a traditional Batman tale in that there is mystery, fights, and sinister villains, what sets it apart as great is the new twists which Scott Synder weaves into the story.  For instance, after volume one, a reader expected a pissed off Bats to go find and confront the Owls in Gotham City, but the way that epic scene developed was a huge surprise for me.  And when an unexpected villain and his bizarre history showed up, a reader will be both surprised and intrigued as to who and what this person claims to be. 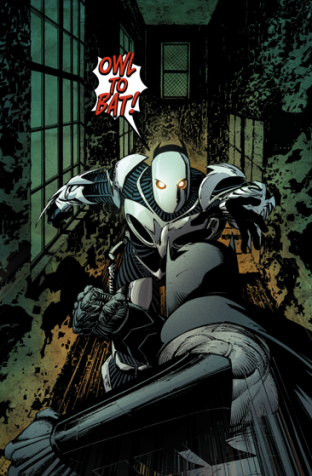 And when all the fights are over and the Dark Knight has apparently triumphed, everything is wrapped up by Bruce and Dick having a heartfelt talk, where the “truth” is supposedly revealed and the two bury the hatchet and move on with their friendship.  (I even liked that part of the story.  Guess, my kids have turned me into a damn softy.)

As for the “Fall of the House of Wayne” issue, I have to say I thought it was very well done.  Synder really reveals Bruce’s parents and their circumstance in a new light, and using Jarvis Pennyworth as the narrator was a great touch.

“First Snow” was the only story which felt a bit weak to me, but even this origin story of Dr. Victor Fries was an interesting mix of past and present, which exposed a very important secret about one of the Dark Knights constant villains.  Nope, it didn’t blow me away.  For what it was though, it was decent enough.

Well, it took me all of volume one to grow comfortable with Greg Capullo’s take on Batman, but now, I really like it.  It just seems right.

As for Rafael Albuquerque’s art in “Fall of the House of Wayne”, it was perfect for the story.  It had that old, ethereal quality which reminded one of an Edgar Allen Poe story, which was obviously what the creative team was going for in this one.

Jason Fabok’s art in “First Snow” was smooth.  The uncluttered, whitewashed look of the flashbacks were especially well-done, and some of my favorite art in the collection.  Have to say the scene with Batman and his flaming glove was especially badass.  Loved that one.

All in all, I loved this collection.  It apparently put the Owls story to rest . . . for the time being anyway, and it did so in great fashion.  Highly recommend this one.

1 Response to BATMAN: THE CITY OF OWLS