BATMAN: THE COURT OF OWLS

Batman, Vol. 1: The Court of Owls by Scott Snyder

I’m not a Batman aficionado. Sure, I’ve followed the Dark Knight a few times in my life, loved his role in the different Justice League books, but he hasn’t ever been my favorite super-hero.

Why? Tough question. Not exactly sure, really. It might be too much Wayne angst. Could be that Bat’s arrogant infallibility wears me out quickly. Or it may be that I seldom feel like he is in real danger. I mean, the Caped Crusader always has something up his sleeve: secret plans, hidden weapons, or the like to take care of any enemy or problem which arises.

That brings me to Scott Snyder’s The Court of Owls – a story which rekindled my love of Batman, because it absolutely kicked ass.

As our tale begins, Batman is feeling pretty good about his mastery of the streets of Gotham. No, he doesn’t believe he has the place cleaned up yet, but he does think he is on the right track, is in tune with Gotham’s heart beat, and has his finger on the pulse of the place. But then something out of the shadows rocks the Dark Knight to his core.

For as long as anyone can remember, conspiracy theorists have whispered that Gotham is run by a secret society. This “Court of Owls” allegedly made up of many powerful people who control the city from hiding, and are behind most of the horrible things that happen in its streets.

When he was a young man, Bruce Wayne firmly believed these rumors. In fact, he suspected that the “Owls” were behind the murder of his parents. So much so, that young Bruce’s first investigation was tracking the Owls to their nest.  He was obsessive about it; only abandoning his crusade when he hit a dead end – one that led him to assume the group was merely an urban legend, nothing more.

Now, years later, the Court of Owls explodes from the shadows, announcing its presence through the calculated violence of its assassin called The Talon. And as Batman is caught by surprise and sees his aura of invincibility shattered, even he begins to wonder if he can defeat an enemy who can hide unseen within Gotham City itself?

Absolutely, great story. Loved how Snyder makes Batman fallible again. He almost seems human. He gets surprised. He is thrown off balanced. Many times, he is hanging on by a thread, as he desperately tries to make sense of what is going on. And the Owls always seem to be one step ahead of him.

As for the art, I know many reviewers I follow had problems with it, and I see their point – no one likes a fat faced Batman. However, even though it wasn’t my favorite, the art was not a sticking point for me, and I found myself enjoying it, especially some of the otherworldly sections. 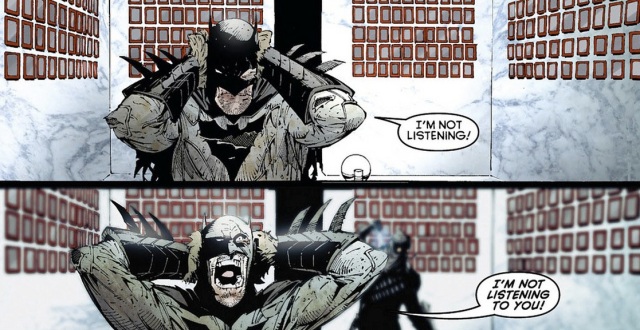 All in all, I don’t know why it took me so long to read this book. The Court of Owls really renewed my love of Batman, and for that – if for nothing else – this one has a place on my all-time favorite graphic novels.

5 Responses to BATMAN: THE COURT OF OWLS