INTERVIEW WITH MICHAEL LIVINGSTON, AUTHOR OF THE SHARDS OF HEAVEN 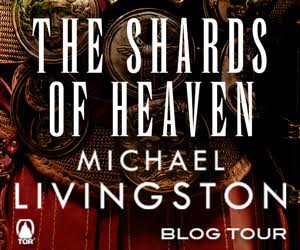 Hi, Dr. Livingston, thanks so much for taking the time to answer a few questions!

No problem. Thanks for having me!

1) Please tell us a bit about “The Shards of Heaven” and what inspired you to write it?

The Shards of Heaven is a historical fantasy. Part Indiana Jones, part Game of Thrones, it is an adventure set during the rise of the Roman Empire: as conflict rages between Mark Antony, Cleopatra, and the heirs of Julius Caesar, artifacts of myth and legend are discovered that may change the course of history.

I have had no greater inspiration for this book than the history and the legends of the past. People tend to think of the past as dull and boring, but nothing could be further from the truth. There’s so much we don’t know, and much of what we do know can boggle the mind.

2) I’ve read that you are a professor at The Citadel; would I be correct in assuming you teach in the history area? If so, what is your speciality?

I teach in an English Department, but my first degrees were in history and that’s always been my passion and my perspective. Colleagues have broadly termed me a cultural historian of the Middle Ages, which fits well enough. My specialties range from medieval paleography (reading and editing manuscripts) to medieval military history.

All that said, I am very fortunate that The Citadel supports my career interests no matter what century I dive into, whether I’m writing on the Battle of Crécy, on Chaucer’s manuscripts, or on J.R.R. Tolkien’s Middle-earth — or even composing historical fantasies about Ancient Rome!

3) There are many historical figures in “Shards.” How much pressure did you feel to make them historically accurate?

The way the narrative is constructed, it isn’t meant to change the facts of the period. Instead, it should serve to fill in the gaps between the facts that we know (or think we know). As a result, I felt a lot of historical pressure — not just to get the characters right, but also the settings, the technologies, and the mentalities of the period. What you see in the book is the tip of the iceberg of research that kept me busy working out every detail I could manage. Writing these is great fun.

4) Did you have any favorite characters to write in “Shards” and, if so, why?

The Shards of Heaven is composed of a variety of points of view, and I confess I like them all — even the ones with seemingly dubious intentions.

That said, I really enjoy watching the development of Cleopatra Selene. She’s young and headstrong in the beginning of this book, but so much of this is due to the bounds of her experience. At her core she is a truly resilient and remarkable human being, and I’m very pleased to say that her story is just beginning.

5) Is there anything which was cut from the story that you wish had not been? A favorite scene or dialogue which vanished onto the cutting room floor?

Because this book has a fairly complex plot, I have to write to a tight outline that keeps me from having a lot of extraneous materials. That said, my first draft of the book had a much extended scene of Juba (an adopted son of Caesar) first arriving in Rome. I enjoyed the chance to see a living and breathing city as he walked through it to meet Octavian — and to see highlights like the Tarpeian Rock — but I ultimately decided that it was slowing down the action too much. So it got cut.

6) Do you love, hate, or feel indifferent to the major role social media plays in the marketing of novels in this era? Have you felt any added pressure to play a bigger role on social media?

Social media is a strange thing. I quite enjoy the way that it allows me to connect so easily with readers, and I’ve “met” some great folks through it. At the same time, it seems to be establishing a new kind of requirement for writers that doesn’t necessarily fit the craft. It is particularly unfortunate to see it replacing some traditional streams of publicity and marketing. In the run-up to the release of Shards, for instance, I was told by someone that the book would likely not do well because it wasn’t singled out by the publisher and I didn’t have a significant enough individual social media presence to make up for that loss. I don’t think any of that is quite true as a rule, but it disturbs me that it could be true, that the time may be coming when most writers may need to be active and engaging social media personalities to have success. Simply put, not everyone is cut out for that.

7) Do any historical-based movies annoy the hell out of you due to their historical inaccuracies? If so, name some names and tell us where they went wrong?

It happens, sure. Watching Braveheart and seeing that — beside the wrong clothing, the wrong armor, the wrong face-paintings, the wrong weapons, the wrong tactics, and the wrong accents — the Battle of Stirling Bridge is being fought with neither a river nor a bridge … yeah, I can get a little twitchy. Usually, though, I try to turn that part of my mind off and separate the real history from the perceived history. Life is more relaxing that way!

8) Coolest historical site you have ever visited? Why?

A few years ago, my parents decided to celebrate their 40th wedding anniversary by having our immediate family go exploring in a secluded stretch of canyon country in the American Southwest (which may say a lot about my family). Late one afternoon my brother and I followed a narrow rock ledge along a high wall … and stumbled right into a small set of Ancient Puebloan cliff dwellings that appeared to have lain untouched since the inhabitants left some eight centuries ago. To find such a pristine site, in such a gorgeous place and in the company of such awesome people, was a truly unforgettable experience.

9) Obviously, “The Shards of Heaven” is just the beginning of the story, so what are your future plans for the series?

The next book, The Temples of the Ark, is finished and will be out next year, and I’m a third book will follow that in the year following. The arc of that trilogy covers decades of history and traces an enormous amount of development on the part of the characters. It also reveals that the story of the Shards — and their power — is far bigger than anyone suspects in book one!

10) Any words of wisdom for aspiring authors?

Finish. You’ve got to finish. 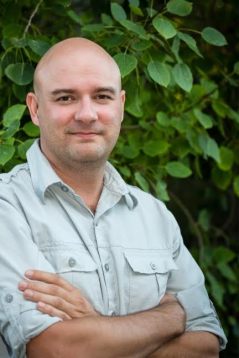 MICHAEL LIVINGSTON holds degrees in history, medieval studies, and English. He is an Associate Professor of English at the Citadel, specializing in the Middle Ages. His short fiction has been published in Black Gate, Shimmer, Paradox, and Nature.

4 Responses to INTERVIEW WITH MICHAEL LIVINGSTON, AUTHOR OF THE SHARDS OF HEAVEN