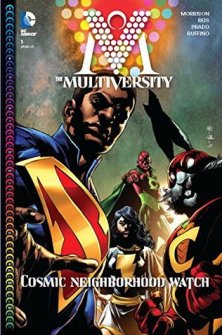 The Multiversity by Grant Morrison

Short Version: A collection of fairly self-contained stories with an overarching plot that attempts to tie them all together. Some of the stories were good; some were bad. Overall, I liked The Multiversity, but the main story was a bit bizarre and a tad confusing — in other words, typical Grant Morrison.

Long Version: Yet another ambitious DCU story focusing on the destruction of the Multiverse. This time the apocalypse is being orchestrated by a group of uber villains dubbed “The Gentry.” These guys’ devious plot is to insert a cursed comic book into every world, thereby causing a chain reaction which will ultimately lead to the total devastation of worlds!

Naturally, when reality begins to unravel, the various heroes of all the different multiverse earths have to uncover what is causing the problems, unite in some way, and fight to keep everything from being destroyed in a Final Crisis! (Uh, didn’t Morrison already write about a Final Crisis? Okay. Guess this is another one.) Brawl-fests ensue thereafter.

Like people who read my reviews know, I’m one of those on the fence about Grant Morrison. Honestly, I’ll read one story and be blown away by his mind-warping plot lines, but then I’ll read another and think it is a load of shite, which he has made obtuse and overly complex merely to hide its overall stench. And The Multiversity didn’t really change my view of Morrison in the least.

Most of the issues in this series are decent, if not spectacular. The Multiversity #1 and #2 are the usual big event type stories with pages and pages of superheroes fighting villains. In between these bookend issues, there are one-shots stories; each set in a different world with a different set of heroes. In one, Morrison and Frank Quitely channeled their twenty-first century Watchmen, producing the highly anticipated ‘Pax Americana.’ In another the focus is on a world where crime has been eliminated and a celebrity culture of superheroes has grown up. The Society of Super-Heroes goes all retro in one issue; Captain Carrot and his Amazing Zoo Crew make an appearance; and there is even a Guidebook filled with details about the multiverse worlds.

The only issue which really struck a nerve with me was the Grant Morrison-Jim Lee ‘Mastermen.’ Here Morrison tackles the question of “What if Superman had crashed in Nazi Germany and been raised by Hitler?” Naturally, Supes (now known as Overman) wins World War II for Hitler and eventually becomes the next Fuhrer of a Third Reich which rules the world. Only Uncle Sam and the Freedom Fighters still resist the Overman’s enlightened but totalitarian rule. Pretty straight forward but had some real strength to it. 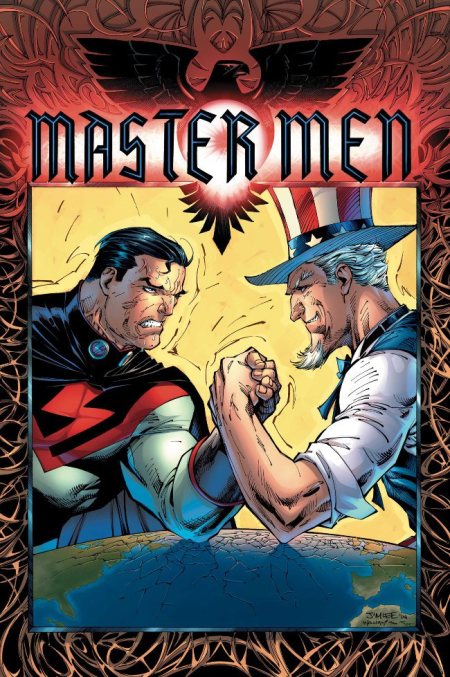 Now to be fair, there are much smarter comic reviewers out there saying the whole set up in The Multiversity has a deeper meaning. Its complexity meant to express a more important message. Specifically, Morrison is setting The Gentry up as the representative of intellectuals who are ruining comics and the character Nix Uotan as the adult bloggers/critics who are destroying the magical mayhem of comics by always seeking to make it more adult oriented and logical. I didn’t try to read that into the story, but it might be there, and perhaps it will make the series more meaningful to some of you. As for me, I’m reading to be entertained, not enlightened, so the whole “deeper meaning” stuff didn’t make me like this series any more or any less.

The one thing I can rave about is the art. Each comic is drawn by a different artist, and every one of them does an excellent job. Ivan Reis, Chris Sprouse, Ben Oliver, Frank Quitely, Cameron Stewart, Marcus To, Jim Lee, and Doug Mahnke to name just a few. Each bringing their A game to The Multiversity, making it a real joy to keep turning the pages.

So should you buy this collection? If you’re a Morrison fan, you don’t even need to ask the question, because you will undoubtedly love The Multiversity. If your not a Morrison fan, then don’t expect to have anything here change your feelings about his work. And if you’re on the fence about all this, what do you have to lose?  Nothing.  So pick this one up and dive in, because you might love one of the stories.

This entry was posted in 3 Stars, DC, Graphic Novels and tagged DC Comics, Grant Morrison, The Multiversity. Bookmark the permalink.

2 Responses to THE MULTIVERSITY