FUN DAY MONDAY, OR THE BOOKS THAT WILL HELP ME SURVIVE THE WEEK AHEAD (SEPTEMBER 21, 2015)

This week I’m still playing catch up with the novel I started last week while adding an older novel I’ve been wanting to read for a while. 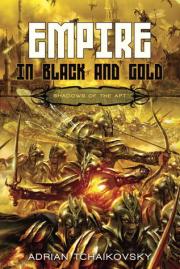 Empire in Black and Gold by Adrian Tchaikovsky

Series: Shadows of the Apt #1

“The city states of the Lowlands have lived in peace for decades, bastions of civilization, prosperity and sophistication, protected by treaties, trade and a belief in the reasonable nature of their neighbors. But meanwhile, in far-off corners, the Wasp Empire has been devouring city after city with its highly trained armies, its machines, it killing Art . . . And now its hunger for conquest and war has become insatiable. Only the aging Stenwold Maker, spymaster, artificer and statesman, can see that the long days of peace are over. It falls upon his shoulders to open the eyes of his people, before a black-and-gold tide sweeps down over the Lowlands and burns away everything in its path. But first he must stop himself from becoming the Empire’s latest victim.”

Adrian Tchaikovsky was born in Woodhall Spa, Lincolnshire before heading off to Reading to study psychology and zoology. For reasons unclear even to himself he subsequently ended up in law and has worked as a legal executive in both Reading and Leeds, where he now lives. Married, he is a keen live role-player and occasional amateur actor, has trained in stage-fighting, and keeps no exotic or dangerous pets of any kind, possibly excepting his son.

Praise for Shadows of the Apt

“Longtime epic fantasy readers will find many familiar elements in this intriguing debut. There’s the peaceful, vulnerable land, in this case the Lowlands, threatened by the Mongol-like Wasp Empire. The lone man who sees the danger is unwilling Lowlands spymaster Stenwald Maker. A charmingly diverse group of agents and allies draws from most of the strictly delineated insect-themed clans (which rather resemble the character classes of role-playing games) and runs the gamut from naïve student to embittered mercenary. Patriotic but conflicted Wasp Thalric puts a sympathetic face on evil. Tchaikovsky exercises considerable talent in assembling these well-worn pieces into a new puzzle, developing an interesting story and world with humor and skillful prose. Readers may be pleasantly surprised to find themselves looking forward to future installments.” — Publishers Weekly

This entry was posted in Funday Monday and tagged Adrian Tchaikovsky, Empire in Black and Gold, Funday Monday, Shadows of the Apt. Bookmark the permalink.

5 Responses to FUN DAY MONDAY, OR THE BOOKS THAT WILL HELP ME SURVIVE THE WEEK AHEAD (SEPTEMBER 21, 2015)