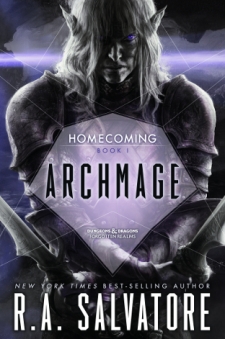 Archmage continues the epic Legend of Drizzt series by R.A. Salvatore; a tale that is among the The Longest Fantasy Series ever produced. That is an awful lot of books following this lone Drow, but somehow, Mr. Salvatore continues to keep the stories fresh and exciting after all this time.

The tale begins with the War for the Silver Marches having ended in the defeat of the orcs and their allies the Drow of Menzoberranzan. Naturally, the dwarves of the three citadels are overjoyed at their hated enemies defeat and banishment to the distant mountains, and none more so that Bruenor Battlehammer, who sees this victory as the first step in finishing up business that eluded him in his first life. And so he immediately turns his attention from rebuilding the Silver Marches to rallying a force of dwarves to follow him to their ancient homeland of Gauntlgrym, where he intends to drive out its new inhabitants and reclaim it for his people.

The dwarven task will not be easy, however, because the Drow citizens of the city of Q’Xorlarrin are the main residents of ancient Gauntlgrym, and they intend to keep it. But the Drow (as usual) are distracted by the constant in-fighting of the Menzoberranzan royal houses. These chaotic groups busily weaving intricate webs of intrigue between themselves; each house hoping to raise their own standing by seeing to the humiliation or destruction of the others within Goddess Lolth’s city. And if that wasn’t enough, behind the scenes Lolth herself is busy expertly instigating it all. Her true motives remain hidden, but her initial desire is revealed, as she tricks an unsuspecting ally into slowly planting within Archmage Gromph Baenre’s mind the idea to cast a spell that will surely result in the destruction of the drow themselves!

The Companions of the Hall, meanwhile, come to yet another fork in their road of friendship. The reincarnated companions of Drizzt having helped save him and now having aided Bruenor in setting right the threat of Many-Arrows. In many ways they have fulfilled their obligation to one another. And some among them begin to wonder if they should remain together or part ways to pick back up with their new lives. (Their answer might even surprise you.)

From this beginning, Salvatore weaves his familiar brand of sword and sorcery. This Drizzt concoction filled with rousing sword fights, intricate subterfuge, godly machinations, and brief interludes of character introspection. Yes, there are page after page of Drizzt’s every action and sword stroke during his duels. And, yeah, Catti-brie continues to collect powers like they are pebbles on a mountain hillside. But it is all so very familiar, so comfortable that it doesn’t detract from the story, because this is Drizzt . . . and Catti-brie . . . and Bruenor . . . and all the rest out having their usual amazing adventures. It is suppose to be fun and fantastical and large-than-life. I mean, that is what Drizzt is all about, right?

Even as I ask that question and insinuate my own feelings about what my answer would be, I realize that many might be disappointed in this novel. Well, actually, I know some long-time readers are, because I’ve read their reviews or heard their criticisms spoken aloud. The sentiment being that this is just more of the same. Another quest to retake a long-lost dwarven homeland by Bruenor and his friends. One that is a pale reflection of earlier quests to retake Mithral Hall or uncover Gauntlgrym. Each obstacle, each decision, each personal moment of this band harkening back to previous books and similar situations from earlier in the series.

Well, after hearing and digesting those criticisms of Archmage, I’m not going to try to refute them.  It really isn’t my job to do so anyway. I mean, I’m just a reviewer, who expresses my personal feelings about the novels I read.  I’m not a Drizzt expert. I don’t pretend to be. So while I might vaguely recall this or that being similar to something I read in the initial trilogy two decades ago, it didn’t keep me from enjoying the sword and sorcery fun dished out by the author here.

So if you haven’t tried Drizzt yet or have been away for a while, pick this one up, because Mr. Salvatore is still brewing a really smooth blend of sword and sorcery adventure, and it goes down really easily.

Wizards of the Coast and Netgalley provided this book to me for free in return for an honest review. The review above was not paid for or influenced in any way by any person, entity or organization, but is my own personal opinions.