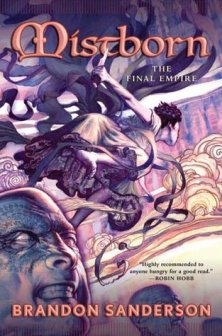 The Final Empire by Brandon Sanderson

I came late to the Brandon Sanderson show. Numerous things caused this. Marriage, work, and kids did dramatically reduce my reading time just when Mr. Sanderson first arrived on the scene. And, no, I didn’t get introduced to him through Wheel of Time, because my disgust with the middle of that series made me abandon it long before Sanderson took over writing duties. But I did keep having his name whispered in my ear, and the suggestions to “Read Sanderson already!” rose to such levels that I finally picked up Mistborn: The Final Empire just to make it stop.

As for this book, the story can be summed up as a group of Ocean Eleven-type thieves who plan the ultimate heist. These rogues intend to destroy the magical enforcers of the evil and immortal Lord Ruler (The Steel Ministry and the Canton of Inquisition), slay said Lord Ruler (Who has ruled the Final Empire for a thousand years), take over the capital city of the empire, and become the spark to ignite an empire wide revolution that frees the “Skaa” from the ruthlessly abuse they have endured from the noble houses who actually run the empire. (This group of thieves will also become filthy rich, but that isn’t these guys main focus with this heist – well, at least, not most of them.)

Naturally, there are obstacles to overcome for this crew of saviors. First, the Skaa they want to ignite into rebellion are malnourished, magically challenged, and beaten down to the point they have no desire to fight anyone – even their own oppressors. Two, the majority of people with magic (They are called Misted, and if they are trained users of allomancy they are dubbed Mistborn.) are from noble houses, which are nearly unanimously on the Lord Ruler’s side. And three, no one – not even our heroic rogues – know any way to actually kill the Lord Ruler, because he is basically indestructible as well as immortal.

Never fear though, the leader of our pack of revolutionary rogues, Kelsier, is working on a way to get to the Lord Ruler. And when Kelsier puts his mind to something, it inevitably gets done. I mean, this guy is the only person to ever escape the infamous death mines at Hathsin, so if he says he has a plan to make everything work, then everyone believes him and continues on with the mission.

One of Kelsier’s helpers in this endeavor is sixteen year old Vin. This street orphan grew up with her older brother working various thieving crews; her contribution to the gangs being the strange power she seems to possess. And when Kelsier eventually stumbles upon her, he immediately turns her into a reclamation project, seeing in her someone who not only deserves to live a better life but who can help him forge one for all the Skaa in the world.

From the shadowy mists to the brightly-lit ballrooms, Kelsier, Vin, and their crew of thieves lead readers on a thrilling heist, complete with dangerous foes and mesmerizing allomancy duels. And when the final page comes, it is both satisfying and sad that it has all come to an inevitable conclusion – even if it is a most fitting end for this group of brave rogues.

After closing this book, I have to admit that I enjoyed it. Mistborn definitely lived up to its hype in many ways. The magic system of Allomancy (Magic is powered by the ingestion of trace minerals, which then give Mistborn amazing superhuman powers.) was intricate but not overwhelming; the main characters of Kelsier and Vin were easy to empathize with; the post-apocalyptic world where ash falls eternally and mists rule the night was intriguing ; and the allomancy fights were some of most visceral, action-packed magical duels that I ever recall reading. And for all those reasons, I definitely intend to pick up more of Mr. Sanderson in the future, but even with that being said, this novel wasn’t perfect to me.

First, Mistborn: The Final Empire really felt like a dystopian young adult novel masquerading as a fantasy. I know that makes me sound like some disgruntled old man, but it is how I felt when reading it. I mean, all the characters here speak in modern American and exhibit modern sensibilities; Vin is written like a classic YA heroine who rises up from humble beginnings to become superhuman — even as she finds a sensitive man to give her heart too; and the Mistborn were basically metal eating superheroes. Everything just suggested YA dystopian rather than epic fantasy. This “feel” didn’t ruin the book for me, but I do find it difficult to label it epic fantasy.

Second, the beginning of this novel was slow. There were loads and loads of meandering plot lines which had little to do with the main focus of the narrative. Sure, I was glad to see numerous ballroom parties and Vin learning to become a lady, but none of it really fascinated me, especially since the keys to the success of this whole heist were tied up elsewhere. Guess, my disgruntlement could just be labeled a personal preference, but I would have liked to be in the thick of the action rather than at a ball watching Vin learn to play court politics and find a significant other.

Third, the ending was so neat, so clean I really don’t have much of a desire to pick up the next book. I realize that is an odd criticism, but there it is. Obviously, I can’t talk about the conclusion of this one, but those who have already read it completely understand where I am coming from with this. Mistborn: The Final Empire ends, and in a lot of ways (most ways) it is a satisfactory conclusion. One I personally don’t feel a need (right now, anyway) of ruining by continuing on to the next book.

To sum it up, all my friends who told me I should try Sanderson were right. (There I’ve said it. Happy now?) The ones who suggested this novel as my starting point were also right, because I liked it. (Said it again.) And I do intend to read more of this modern master of writing, but I’m just not sure it will be the rest of this series.

14 Responses to MISTBORN: THE FINAL EMPIRE by BRANDON SANDERSON