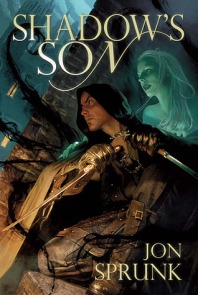 After reading and enjoying the first two novels of Jon Sprunk’s Book of the Black Earth, I discovered that he had already completed a previous series: the Shadow Saga trilogy. Naturally, I had to give this assassin tale a try.

What I found in Shadow’s Son was a well-written tale, which masterfully interweaves intrigue, action, magic, and interesting characters as it propels itself forward through a fully realized sword-and-sorcery world at a breakneck pace.

The tale itself is set in the ancient city of Othir (think Rome); the Holy Church ruling all, dominating all aspects of life in this center of an ancient, world spanning empire. But within the shadows of this City of Light, an assassin with no loyalties and no conscious can make a fortune killing those the clergy and the remaining nobility deem unworthy to continue living. And Caim is just such a man.

At least, he was until his latest contract killing takes him into the home of a noble where – instead of a quick, clean assassination – Caim finds himself immersed in a web of lies; conspiracies of the powerful entangling him and turning him from the hunter into the prey. And, as he flounders in these unfamiliar waters, Caim discovers that his conscious might not be as dead as he thought, that his tragic past might hold the key to his continued survival, and that he must finally face what he truly is!

What I really loved about this book was the streamlined nature of the narrative. Jon Sprunk does an excellent job of getting to the point without unnecessary wordiness. No needless info dumps. No never-ending dialogue. No endless foreshadowing of future events. Nope, this story of Caim the assassin is in perpetual motion; Sprunk providing all pertinent information for the ongoing action in carefully measured doses before quickly immersing his readers back in the sword-and-sorcery narrative. A writing style that reminded me of several of my all-time favorite fantasy authors, such as Michael Moorcock and Glen Cook, as well as newer ones, such as Brandon Sanderson and Brent Weeks.

Now, was Shadow’s Son ultra-realistic? No, which could turn some readers off. Did it show signs of being the authors first novel? Well, naturally. Was there more than a few familiar assassin tropes included in the narrative? Absolutely. Did the characters sometimes make head-scratching decisions? I guess you could say that. Was the novel a fun, addictive read anyway? For me, at least, it definitely was.

My final opinion on this novel is simple: if – like me – you’re looking for a fun read, then you should definitely pick up Shadow’s Son. While the plot and characters don’t reinvent the fantasy assassin genre, I don’t Jon Sprunk was really aiming for that type of story. Instead, he seemed to be providing his readers with a sword-and-sorcery vehicle where they can forget about reality for a few hours and live the life of a fearless assassin slinking through the darkness in a magical, medieval-like city filled with known and unknown enemies. And in this, he is wildly successful. I personally found Shadow’s Son difficult to put down, devouring it as quickly as I could find time to read it, and I’d encourage others to pick this one up and try it as well. I really think you will be happy that you did.