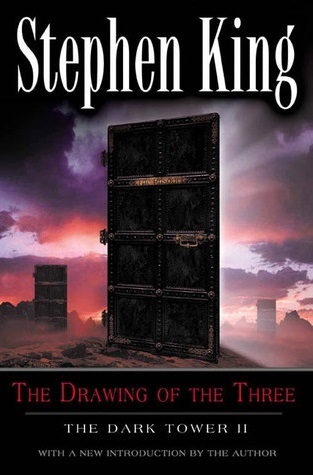 The story itself picks up almost immediately after the end of The Gunslinger. Roland Deschain, our forlorn hero, has awakened from a magical slumber to find himself years older and the man in black gone! But more, he soon is pressed past the point of exhaustion, assaulted by unexpected enemies and poisoned to boot on the seemingly endless shores of a unfamiliar ocean. The only way for him to survive to open three doorways to another world (our Earth) and find three people who are destined to not only save him from his current plight but become his new ka-tet on the road to the Dark Tower! (Or, Roland might just be delirious; his fevered brain crafting a way for him to hold off death until true salvation can be found.)

Now, obviously, that sounds like the beginnings of an interesting story. And it is. Stephen King does a stellar job of making a journey up and down a beach by a sick man, who is opening doors (which might be figments of his own imagination) interesting beyond any reasonable expectation. The problem is that the focus of this tale is so different from volume one that it is almost like reading another series entirely.

For those not familiar with The Gunslinger (The Dark Tower Book #1), it is an amazing fusion of western, post-apocalyptic, horror, and fantasy themes which drags a reader along behind Roland Deschain as he pursues the shadowy “Man in Black” across a world “that has moved on.” The action all takes place in this mystical land of gunslingers and wizards with only a few brief nods being made to the modern world. Other than those few modern touches, the tone is very definitely NOT modern.

The Drawing of the Three, however, has only a small portion of the novel taking place in this other world environment. Instead, the above mentioned magical doors take Roland into our own world (albeit at different historical times) where he interacts with normal people, who are dealing with very “real” world issues like drug addiction, drug smuggling, the mafia, mental illness, racial discrimination, bad parenting, and other very “modern” problems. (Yes, these type of issues have always been part of human existence. However, the way in which they were dealt with during the past three millennia is absolutely different than how they are dealt with now, and this story definitely deals with them in a very modern, American way.) Sure, Roland brings a unique view to the mentioned ills, but the narrative still reads like a contemporary fiction piece. In other words, Drawing is a one-hundred and eighty degree turn from the fantastical, post-apocalyptic western The Gunslinger.

So is it “bad” that Mr. King changed the tone from book one to book two?

Well, the answer to that is based upon the individual reader’s personal preferences. I mean, The Drawing of the Three is a really good book in my opinion – but I didn’t enjoy it very much at all.

Yeah, that is what I am saying. You see, I fell in love with The Gunslinger because of the amazing world Stephen King produced by his amalgamation of different writing genres. While reading it, I found myself on the edge of my seat every moment, wondering what else was different about this world and how Mr. King was going to surprise me next. And while Drawing reproduced a portion of that excitement in the modern world struggles of Roland and the people he found behind the doors, the majority of their adventures were too “normal” for my reading tastes.

Even with that being said, however, Drawing was not the death knell for my Dark Tower journey like it has been for others. Sure, this book was a chore for me to read. Yes, I found myself plodding through some parts of the narrative, dying for it to end. However, just like Roland on that beach, I discovered that my desire to reach the Dark Tower and learn more about the mysteries of the world was greater than any obstacle – including my dislike of The Drawing of the Three. Whether that is how you will feel as well is a decision that only you can make after giving the novel a try.

Buy The Drawing of the Three: (The Dark Tower #2)

This entry was posted in 2 Stars, Cross-Genre, Fantasy, Post-apocalyptic, Science Fiction and tagged Dark Tower, Dark Tower The Gunslinger, Roland Deschain, Stephen King, the dark tower, The Drawing of the Three, The Gunslinger. Bookmark the permalink.