FLASHBACK FRIDAY — THE RIDDLE-MASTER TRILOGY by PATRICIA A. McKILLIP

I was a teenager! Not only that, I was a fairly arrogant one, who believed that he knew everything, had seen everything worth seeing, done everything worth doing, and had read every fantasy series that mattered.

When admitting that, I realize how immensely naive and prideful it all sounds – especially that last bit. However, at the time, I felt my observation about fantasy were completely justified. I mean, I had read J.R.R. Tolkien’s books (all of them at the time), swung swords with Howard’s Conan and Kull, devoured Stephen R. Donaldson’s Thomas Covenant stories, inhaled McCaffrey’s Pern, went through the wardrobe with C.S. Lewis, fought for and against chaos with more than a few of Moorcock’s eternal champions, drifted through the shadows of Amber with Zelazny, and . . . I’ll stop already. You get the idea I’m sure.

Anyway, I was pretty well read in the fantasy genre for a teenager of my time . . . I thought. Then I picked up The Riddle-Master Trilogy by Patricia A. McKillip. I can’t remember exactly when, or how it came into my hands. I do know the covers weren’t really my cup of tea at the time nor did the description promise testosterone-driven adventure. But for some reason, I read it anyway. 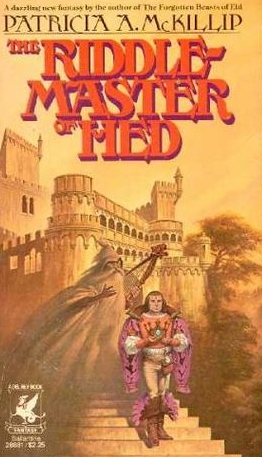 The story was simple enough. Many generations in the past, the wizards had vanished from the world; all the remaining magical knowledge hidden in riddles. The Prince of Hed, Morgon, had a talent for riddles and had decided to try to win a crown from the dead Lord of Aum.

However, Morgon had awoken something sibilant by his riddling. Ancient evils were stirring. They stalked the land after him. His friends began to disappear; some even replaced with what had to be shape changers. And so, Morgon was forced to flee his simple kingdom, journeying the land to uncover the secrets to reach the High One who ruled from mysterious Erlenstar Mountain.

Naturally, our prince did not go alone. His main companion on this quest was Deth, the High One’s Harper. And as the two stumble blindly from one terrifying encounter to another, Morgon begins to see that only by solving the riddle of the three stars upon his forehead can he uncover his own destiny!

I know, I know it sounds like a standard fantasy stories from the time period. And I suppose it is . . . to a certain extent. But McKillip writes it all with such elegant prose that it still remains fresh in my memory; the wonderful imagery, the powerful themes, and the subtle plot lines still alive within me. Even now, I recall the ending of book one and the beginning of book two as if I had just read them yesterday; the powerful emotions of both scenes etched into my memory more so than many recent novels that I have read.

No, Riddle-Master might not be a novel read often anymore, but it is one that should be. With the series, McKillip brought an elegance and beauty to the fantasy genre that I personally had not experienced to that time. And, while certain parts of the story have left me, the feelings that it invoked never have – nor, I hope, ever will.

8 Responses to FLASHBACK FRIDAY — THE RIDDLE-MASTER TRILOGY by PATRICIA A. McKILLIP