Posted on December 4, 2014 by Bookwraiths

HIGH PRIEST is nearly always evil, either on his own account or on behalf of the dark lord.

Okay, let us look at a few of my favorites.

Whenever I think of fantasy High Priest the image of the na-Mhoram on the old school cover of White Gold Wielder comes to mind. Yeah, he is the one in the background holding up the weird staff of flames.

While the na-Mhoram is not called a “high priest”, he does, in fact, act exactly like one. In this sequel to The Chronicles of Thomas Covenant the Unbeliever, our anti-hero leper returns to the Land to find it dramatically changed. And one of those changes is the Clave, which has taken over the ruling of the Land from the former Council of Lords, twisting the devotion of the people to the Earthpower into obedience toward the rule of the Clave and the constant sacrifices demanded to power the Banefire: a magical bonfire that is kept eternally burning to weaken the Sunbane (a climate change of epic and unpleasant portions.)

Here I have my favorite high-priestess. That counts, right?

Arianrood is the Ead, or in layman’s term “the First”, which means that she is the first child ever born of Mother Earth. Being both immortal and more powerful than any other creature upon the world, Arianrood fights to protect her weaker sibling from the evil powers as they rise and unleash death and destruction upon the world. After helping to raise the mortal Fealoth the Bright to godhood to fight the Beast, the Ead then becomes the high-priestess of his new religion and his prophetess, proclaiming the coming of the Golden Age when peace will reign forever. But behind Arianrood’s beauty and power, there lurks an invisible taint of . . . not evil, but weariness for the world, and its existence concerns the other great powers of the world, who fear that perhaps Fealoth was wrong!

MOTHER OF WINTER by BARBARA HAMBLY

Twelve years have passed since the end of the Darwath Trilogy, and in the ancient Keep of Dare, two former Californians, Rudy Solis and Gil Patterson, have grown accustomed to their new lives as wizard and warrior and part of this small group of survivors of the Dark. But in the last few years a new Ice Age has begun in the world. One that is accompanied by “Slunch”, a near indestructible fungus, that is slowly choking out all the arable farmland and also seems to be the catalyst for mutant creatures. Naturally, the appearance of a seemingly all-powerful substance like “Slunch” results in a new religion growing up to worship it, and gradually Rudy and Gil begin to understand that not only are there people among them worshipping the slunch and its makers but that the religion has its own grotesque high priest hiding among them! 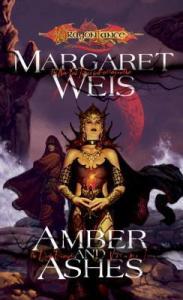 While I personally did not enjoy this series, it definitely revolved around a high priestess.

In this post-War of Souls series, Chemosh, Lord of Death comes down to earth and claims Mina (a character in the previous trilogy) as his own. Not only does Mina fall in love with Chemosh, but it appears that he also falls in love with her. Be that as it may, the Lord of Death still sends his new high priestess out into teh world to do his bidding and build for him a huge following, so that he can ultimately take over the world.

THE BOOKS OF THE SOUTH (THE BLACK COMPANY) by GLEN COOK

This novel presents me with a fine dilemma, because it can be argued that two characters might be the High Priest(tess) of Kiva at various times.

Narayan Singh is one of these people. As one of the last members of the Deceivers cult of the Goddess Kina, Goddess of Death, he has been tireless in his commitment to bringing his deity back into the world and definitely acts as an unnamed high priest of the cult.

However, Lady is also being groomed for the position by Kiva herself, followed by the Deceivers, and is portrayed as the cult’s high priestess in all but name.

Naturally, I have my guess as to who is the “real” high priest of Kiva, but either way, I’ve decided to include both of them here, since they are both worthy of being included on this list.