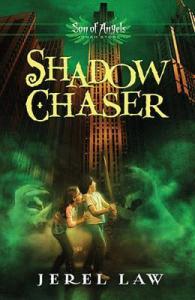 Shadow Chaser is the third book in the Jonah Stone, Son of Angels young adult’s book series by Jerel Law. This novel is unapologetically Christian in nature and also in its hero’s resemblance to one Percy Jackson. If you are either a follower of Jesus Christ or a lover of half-blood heroes then you might enjoy this YA story of modern day, angelic conflict and Godly messages.

The world of Son of Angels is basically the modern day. In the preceding installments of the series, Mr. Law introduced Jonah Stone: a teenager who is the son of a minister and unbeknownst to him a “Quarterling” because his mother is half angel, or a nephilim. The revelation of his true nature is unbelievable to Jonah and so is his discovery that the earth is still the center of a great conflict between the angels of God, or Elohim, and the fallen angels of Satan, or Abaddon. A conflict which is unknowingly raging around the world as these spiritual beings fight in a dimension encompassing our own.

Naturally, the discovery of another quarterling draws the attention of not only the “good” angels but also the “bad” angels, who wish to either turn Jonah to Abaddon or kill him. Demons therefore begin to attack not only Jonah but his family and friends as well, so he – like all other quarterlings – is encouraged by the angelic hosts to attend a special “school” in New York City, where he will be trained to defend himself from the constant attacks (both physical and spiritual) of these fallen angels.

With that back story out of the way, we now turn to Shadow Chaser.

Jonah and his two siblings are safely ensconced in the Angel Academy for training. Jonah himself has been doing well, growing in his angelic powers and trying to cope with his newly discovered gift of prophecy, but he has a lot on his plate: not only is he still expected to master a “normal” education but an angelic one as well. Plus, let us not forget that Jonah is still a teenager; one who seems especially hard hit by the onset of acne. These teenage blemishes cause him both physical pain (they later turn into really painful sores) but also makes him the butt of everyone’s cafeteria joke and quickly turns our pizza face teenager into a social outcast. But the fun doesn’t stop there because it is time for angelic testing, which means Jonah finds himself competing against a few other students who have become his “rivals” for best quarterling at the school.

The story that ensues from this setup is an engaging one. Plagued by intense visions and actual pestilence, our young quarterling embarks on his own inner journey for understanding and peace, dismayed by the sickness that invades his body and the turmoil raging in his pubescent soul. Soon, the story turns into a modern day (though watered down for 8-12 year olds) version of the Biblical story of Job, and Jonah has to decide whether to place his trust and faith in Elohim (God) or throw in his lot with Abaddon (Satan). It is a life changing decision that our young hero faces.

After finishing this story, I have to admit that I liked Jonah. He reminded me a lot of Percy Jackson. (Please remember imitation is the sincerest form of flattery.) Our young quarterling is confused, dense to most everything around him, committed to his family and friends, and sincerely wants to do the right thing. However, just like Percy, Jonah is having a hard time finding the right combination of youthful enthusiasm, godly ability, and hard-earned wisdom to actually make the correct decisions. But while he may annoy a reader with his cluelessness, Jonah always comes through when he needs to and saves the day. What else could anyone ask for in a YA hero?

Outside of Jonah, however, I have to point out that this book had some issues. Issues which affected my ability to enjoy this very compelling story as much as I otherwise would have. The three main problems are as follows:

1) The rhythm of the storytelling was a bit inconsistent. We all know life is like a roller coaster: big ups then big downs, but spaced between these highs and lowers are times of normalcy. In Shadow Chaser, there never seemed to be any of those regular moments. One minute Jonah would be having a huge fight with evil fallen angels then he would be over in a corner in the cafeteria having an emotional meltdown because his acne had gotten worse or his friends were making fun of him. While I realize that is very teenage-like behavior, there was too much of this up and down behavior and not enough normalcy for my tastes.

2) There was no real mystery in this book. One thing Rick Riordan did an amazing job of in Percy Jackson was to keep leading a reader around through repetitive quests while promising a big payoff; the payoff being the answer to a prophecy or the reveal of the “bad guy” or whatever. Even when these reveals were not earthshattering, they still gave a reader a feeling of reward for reading yet another installment of Percy’s story. In Shadow Chaser, there was no real mystery for Jonah and the Quarterlings to solve, since you already know that Abaddon is behind everything.

3) While the supernatural world of the angels of Elohim are mentioned numerous times throughout the book, a reader never learns much about them. In fact, the angels are written in such a way that they seem much like any other teacher or military instruction in the real world and their otherworldly dimension just an invisible New York City. I personally would have loved Mr. Law to have fleshed these divine creatures and their spiritual world out in all their supernatural glory, making me sit in silence as I read about the divine splendor of it all, but instead I found myself told over and over again that this person – who acted like and talked like any other person – was a divine and glorious angel. That did not work for me.

All in all, this was an interesting book. It leaned heavily upon the Christian Bible and little know sections of that work, and it was also unabashedly a morality play for a Christian YA audience. However, Mr. Law added in enough action with quarterlings fighting fallen angels or quarterlings vs. quarterlings during their Angel Academy mid-term exams that things never got dull. So, for someone looking for a Christian version of Percy Jackson, this is a good read, but I can see where it might not appeal to everyone.