Never having been a huge fan of Mister Miracle or the New Gods, I went into this read with no preconceived expectations. Sure, I had a passing idea of who Mister Miracle was: a superhero escape artist from New Genesis whose dad was the Highfather of the New Gods (imagine Odin) but who was reared on the hellish world of Apokolips as part of a peace treaty.  Other than that I truly knew nothing about this guy and never had really cared to learn more.  But there was so much wild cheering about how amazing this mini-series was that I decided to give it a go.

Once I popped open Mister Miracle, I very quickly learned that Scott Free might have amazing powers, a wife he adores, and celebrity status as the greatest escape artist ever, but he has problems.  I’m not a psychologist, but the dude seems to have a touch of PTSD, RAD, daddy issues, mommy issues, depression issues, self-esteem issues, and a host of other mental health problems.  All of it leaving him feeling trapped. 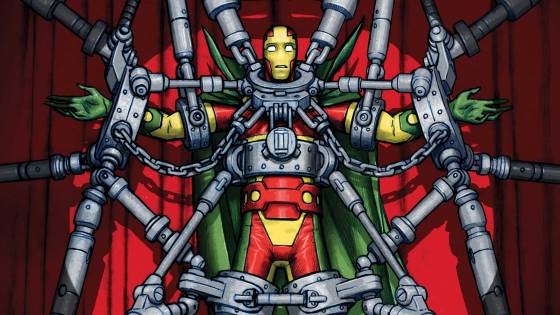 So, naturally, Scott Free does what he does best when he is trapped: he escapes!  His method this time around committing suicide!

You see what the writer did there?  A superhero escape artist escaping his problems by committing suicide.  That’s clever isn’t it?  Subverts standard superhero themes of heroism, accountability, and personal fortitude.  Postmodernist literature at its best.  But, wait, it gets better.

You see, Scott — the escape artist who committed suicide — then performs an even greater escape: he escapes death by not dying!  OMG, that is even more clever, right?

But wait!  There is more.  Did Scott actually succeed in his plan?

Perhaps Scott miscalculated his daring escape from death and is actually dead; the events which occur after his brush with the eternal hereafter merely a post-death purgatory of sorts.  Or, maybe Scott is in a coma, dreaming it all.  Or he could still be bleeding out on the floor, hallucinating all this as his life slowly seeps away.  Each and every one of these possibilities terrifying!!!!!!

On the other hand, Scott might just be alive, dealing with the aftermath of his actions.  His attempted suicide beginning a chain reaction of events which ultimate leads to war between New Genesis and Apokolips; many wonderful, horrifying, and bizarre events taking place all along the way thereafter.  Scott and his wife Barda attempting to deal with all this while maintaining a normal life on Earth.  This unusual balancing act of ordinary and brutal the main theme throughout, as Mister Miracle contemplates deep philosophical thoughts, acts like a emotional scared man-child, and bores the hell out of you along the way.

So what did I think of the book?

Well, it starts out well enough, I guess.  Scott Free’s characterization as an emotional unstable, weak man who has daddy issues and mommy issues and depression issues and a whole bunch of other issues was different, unique even.  Honestly, I can’t recall ever reading a superhero comic where the lead was this uninspiring, emotionally screwed up, or pathetic.  And the whole mystery surrounding his suicide was intriguing. So, at the very least, this story had a nice setup which made me want to crowd around with everyone else and watch where it went.

From there though the whole plot sort of sputtered for me.  There were some highs and some lows along the way to the end. Some cool twists, some dumb plots. Mostly, the art was fairly meh and uninspiring (though others might find it more to their liking.)  And the conclusion tried too hard to twist expectations round and round, be emotionally thought-provoking, yet failed to do either.

Listen, I know my review is going against the consensus.  I realize most comic readers love this series, adore this writer, and that it has won major comic awards.  Truly, I’m as disappointed in not loving Mister Miracle as much as some of you are in me not giving it a 5 star rating, but, unfortunately, the story as a whole did not maintain the high level of its beginning, failed to capitalize on its unique premises, and didn’t really surprise in its conclusion. Really, I’m glad you enjoyed it more than me, but I have to call it like I see it, which is Mister Miracle is merely an okay comic story, nothing more.