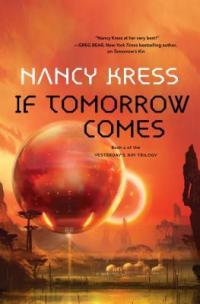 If Tomorrow Comes by Nancy Kress

If Tomorrow Comes by Nancy Kress is the follow-up to Tomorrow’s Kin and the second installment in the Yesterday’s Kin Trilogy. Since there isn’t any way to review this book without giving away spoilers for the first book, I have to warn you now not to continue reading if you haven’t finished book one.

A decade ago Earth was changed by the arrival of aliens. Not only did these being give warning of a coming “spores” plague, but they also left behind technological advancements to aid Earth in their coming trials and tribulations. While Earth was still ravaged by the foretold plague, the advanced notice was put to good use including the building of the starship Friendship.

Once completed, this interstellar craft is dispatched from Earth, crewed with a plethora of scientists including Dr. Marianne Jenner, a very familiar face from Tomorrow’s Kin. She and her fellows tasked with this journey to the aliens’ home world of Kindred to lend aid in that world’s own plague outbreak.

What the Friendship finds on arrival is beyond their worst fears: a primitive world without amazing technology or advanced medicine. Truly, Kindred is a planet completely unprepared for the coming spore plague. The hope for it and the crew of the Friendship surviving what is coming near zero!

Now, it goes without saying that Tomorrow’s Kin was a first contact story, involving the normal elements of the meeting and greeting of aliens come to Earth. If Tomorrow Comes is really a continuation of that first contact story except this time the author turned the familiar script on its head, showing people from Earth’s traveling to an alien world and having to learn about a strange society with alien customs and having to deal with their own ingrained biases and prejudices. This the true heart of the narrative even more than the rising tension and frantic action as the countdown to the spore plague ticks ever downward.

Probably the best element of the novel is the writing of Nancy Kress. She explains the science of viruses in a careful, easy-to-understand way. She also does an outstanding job describing a truly alien people, their society, their morality, and juxtaposing those things with the familiar Earth beliefs. Her careful crafting of both a frightening viral plague and a living, breathing alien world the true highlight of the book.

The weakness of the narrative is the characters themselves however. No one here really comes to life, captures a reader’s interest or makes them feel real empathy. Certainly, the fear of the Earthers that they will be returning home to family aged beyond their worst fears due to space travel time differences is understandable and interest, but most science fiction readers will have seen the issue handled more thoroughly and more emotionally in other stories. And while Dr. Jenner is a familiar name from book one, here she gets lost among a host of one dimension faces who keep making head scratching decision; decisions so easily identifiably as bad choices that they telegraph exactly where the plot is going and leave no real tension about how the story will end.

Overall, If Tomorrow Comes is an okay second book in a series. It does a great job of continuing the spore plague story, taking readers to a believable alien world, and setting up the next book, but it does struggle to add any interesting characters or keep the plot exciting from first page to last. Certainly a novel fans of the series or the author will want to pick up though.

4 Responses to IF TOMORROW COMES