Welcome to Top Ten Tuesday! This is a weekly feature hosted by That Artsy Reader Girl, where a new top ten list hits the web every week!

This week we have a great topic to explore …

BOOKS THAT SURPRISED ME

Honestly, most books surprise me in some way or another: plot twists, character deaths, or whatnot, but I’m sure this topic is really not about those sort of surprises.  The way I’m going to interpret and answer this question is by picking out the novels which surprised me by how much I either enjoyed them or hated them.  And for a change I’m going to focus on the books I enjoyed!

Now, to be fair, I generally enjoy Warhammer novels.  Call them a guilty pleasure if you will.  So when I picked up Blighted Empire after enjoying its predecessor I sort of thought I’d liked it, but what was surprising is that C.L. Werner was able to deliver yet another outstanding sword and sorcery story while slowly evolving the tale away from its core concept of the Black Plague.

When I picked this book up, my expectations were very low.  Reviews for the original edition of the book were quite negative; some would call them scathing.  I wanted to see for myself though.  Have to admit being quite surprised when I ended up enjoying this story quite a bit.  Yes, it had issues, flaws, weaknesses, and similarities to other fantasy works, but it was still a surprisingly solid book.

The first installment of this series, The Iron Ship, aimed high with some grand ideas, compelling plots, a huge world, and a cast of characters who were all family members.  Even with all that, I had some major issues with certain elements of the narrative.  Book two, though, was as close to perfect as possible, correcting the problems, adding even more details to those compelling plots, upping the action, and setting the stage for a great book three.

Purchase The City of Ice

This is a book two of a series, and, again, while I enjoyed the initial volume of the series, book one, Seven Forges, didn’t hit it out of the park for me.  All that changed in The Blasted Lands though when James A. Moore fulfilled all the great promise of this saga by unleashing a continent spanning war upon the world as seen through the eyes of numerous point of view characters.  Should I have been surprised by this turn of events?  Not sure, but I was.

When I picked up this book, I had a feeling we were going to hit it off.  What surprised me though was how much I enjoyed Luke Scull’s Joe Abercrombie inspired grimdark.  Mixing violence, brutality, and darkness with more than a bit of gallows humor, this novel instantly became one of my favorite grims out there, and book two was even better!

Book one of this series was a good introduction to the characters, exotic land, and set a wonderful stage for the epic sword and sorcery story to grow.  Book two had its highlights, but overall, it failed to live up to its predecessor in many ways.  At least, in my eyes.  This third installment of the series though . . . wow, just wow.  A wonderful surprise were Jon Sprunk stuck with what he does best (action, action, action) and delivered a near perfect sword and sorcery tale.

4. Scourge of the Betrayer

Tedious.  Boring.  Nothing happens.  Too detailed.  My reading friends whispered these and many more negative criticisms of Jeff Salyards’s novel in my ear when I asked them about Scourge of the Betrayer.  I decided to read it anyway.  So glad I did because (surprise, surprise) the book instantly became one of my favorites; the realism and pacing of the story exactly what I long for.

Purchase Scourge of the Betrayer

When I requested this book on Netgalley several years ago, I had no idea exactly what Sebastien de Castell had in store for me.  Certainly, I had a premonition that the tale of three friends fighting against overwhelming odds in Three Musketeer-esque style might connect with me, yet imagine my surprise when I stumbled upon one of my favorite fantasy series ever.

This series seems to be brought up quite a lot by me.  Normal, I guess, since it was a recent discovery of the last year, one I grew very fond of as I read through three books.  Sad thing is the novel sat on my tbr shelf for years after I found it at my local used bookstore.  It still surprises me beyond belief that a book I had so little interest in reading turned into a favorite. 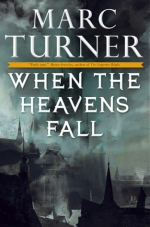 1.  When the Heavens Fall

There are a few “surprising” things about this book which landed it atop this week’s list.  One, I was surprised by how much I grew to appreciate this initial story from Marc Turner’s Chronicle of the Exile series as I kept reading each book; the author building on even the most smallest details to create a complex world.  And, two, it shocks, surprises, and horrifies me that more people have not discovered this book/series and grown to love it.

Purchase When the Heavens Fall

Well, that is my list this week.  Agree?  Disagree?  Have some thoughts on my picks?  Let us all know!

This entry was posted in Top Ten Tuesday and tagged Blade and Bone, Blighted Empire, C.L. WERNER, Col Buchanan, Farlander, Greatcoats, Heart of the World, James A. Moore, JEFF SALYARDS, Jon Sprunk, K.M. McKinley, Luke Scull, Marc Turner, Peter Orullian, SCOURGE OF THE BETRAYER, Sebastien de Castell, Seven Forges, The Black Plague, The Blasted Lands, The Book of the Black Earth, The Chronicle of the Exile, The City of Ice, The Gates of the World, The Grim Company, The Unremembered, Top Ten Tuesday, Traitor's Blade, Vault of Heaven, When the Heavens Fall. Bookmark the permalink.