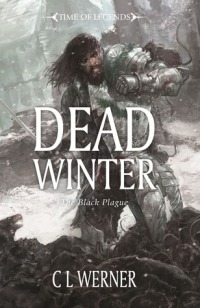 Warhammer fantasy is a setting built on rich lore; a world so similar yet so very different from our own. A place where magic and chaos swirl around everything. Titanic battles and earth-shattering wars are fought. Great heroes and vile villains arise. Triumphs are won. Mistakes are made. Good doesn’t always win. And, many times, it is difficult to tell who is actually good and who is evil. In other words, it is a magical world which feels real, exudes a sense of familiarity yet still remains fantastical. And while all The Time of Legends novels have focused on bringing this world and its lore to life, few have done it as well as C.L. Werner’s Dead Winter, which reads so much like historical fiction that at times you might truly believe all this did, in fact, really occur.

The setting for Dead Winter is the Empire, which Warhammer fans will already know is the greatest kingdom of mankind in the world; Sigmar Heldenhammer having created this bastion for his people over a thousand years in the past. But in 1111, a cascading series of events is about to bring the Empire to its knees, possibly toiling the bell on humanity’s continued existence!

Told through many different points of view characters, this novel goes on to focus in on the Great Plague, showcasing the horrors of an invisible disease spreading uncontrollably through the Empire. Quickly, a reader sees civilization begin to pull apart at the seams. Every layer of society from nobility down to the lowliest peasant attempting to escape the clutches of the pestilence, trying to hold on to their sanity as everyone and everything they love is destroyed. Added to this are companion stories, tales of a greedy, power-mad Emperor and his ruthless minions, a growing insurrection against said Emperor, as well as the diabolical scheme of legendary ratmen. All of these divergent people, places and problems revolving around the Great Plague, melding together to create a gritty, realistic, and very dark story which will evoke strong emotions, both good and bad.

Without a doubt, the most compelling part of Dead Winter is the realistic portrayal of societal collapse as experienced through the eyes of its many victims. From unjust Emperor Boris “Goldgather” to ratcatcher Walter Schill to Prince Mandred of Middenheim to Priest Frederick van Hal, the spread of the plague and its deadly effect on every layer of society in the Empire is shown. Tough choices are made. Many, many people die. Charlatans arise to prosper on the suffering of the many. Vile things are done, some in the name of righteousness. And, ever so slowly, a new, darker world arises where all the societal norms are being questioned, because why hold on to beliefs that didn’t stop everyone from dying!

The only criticism I have with the book is the Skaven sections. To be completely transparent, I have to admit not being particularly fond of ratmen; they bore me actually. But, even with that said, the Skaven sections here were just not very compelling, since they had little to do with the other point of view characters and were too far removed from what was going on in the Empire. Certainly, the machinations and political infighting of these ratmen added a new nuance to the Plague, explained why and how it was began and for what purpose, but beyond that, I did not see anything very interesting about these sections of the book. In fact, I have to admit skimming most of them.

To sum up, Dead Winter is a Warhammer book I’m glad I didn’t miss; the story delivering an emotional reading experience, running the gamut from horror to disgust to anger to rage to contempt to sadness. The plight of the Empire and its people truly bothering me, because, quite simply, the Great Plague evoked a memory of the real horrors our own world has went through so many times with pandemics of the past, and to see such an event played out in a fantasy realm with such emotional and disturbing outcomes was something I won’t soon forget.