MOST ANTICIPATED FANTASY BOOKS IN 2018

The wrapping paper from Christmas gifts hasn’t even settled in the landfill, and I’m already making my list for all the gifts I want the beginning of 2018.  I suppose I just have to accept I have a book problem and build on to my house, so I’ll have more room to store them all.

Blood of the Four

Blessed by the gods with lives of comfort and splendor, the royal elite routinely perform their duties, yet some chafe at their role. A young woman of stunning ambition, Princess Phela refuses to allow a few obstacles—including her mother the queen and her brother, the heir apparent—stand in the way of claiming ultimate power and glory for herself.

Far below the royals are the Bajuman. Poor and oppressed, members of this wretched caste have but two paths out of servitude: the priesthood . . . or death.

Because magic has been kept at bay in Quandis, royals and Bajuman have lived together in an uneasy peace for centuries. But Princess Phela’s desire for power will disrupt the realm’s order, setting into motion a series of events that will end with her becoming a goddess in her own right . . . or ultimately destroying Quandis and all its inhabitants.

Purchase Blood of the Four

Child of a Mad God

When Aoleyn loses her parents, she is left to fend for herself among a tribe of vicious barbarians. Bound by rigid traditions, she dreams of escaping to the world beyond her mountain home.

The only hopefor achieving the kind of freedom she searches for is to learn how to wield the mysterious power used by the tribe’s coven known as the Song of Usgar. Thankfully, Aoleyn may be the strongest witch to have ever lived, but magic comes at price. Not only has her abilities caught the eye of the brutish warlord that leads the tribe, but the demon of the mountain hunts all who wield the Coven’s power, and Aoleyn’s talent has made her a beacon in the night.

Purchase Child of a Mad God: A Tale of the Coven

Magic and technology combine in an epic fantasy like no other.

War is coming to Ruthnia. As ancient, inhuman powers move against one another, Rel Kressind finds himself in the company of the fabled modalmen – giants who regard themselves as the true keepers of humanity’s legacy. Far out in the blasted, magical wastelands of the Black Sands where no man of the Hundred has ever set foot before, Rel comes face to face with the modalman’s deity, the Brass God. What Rel learns in the Brass God’s broken halls will shake his understanding of reality forever.

Magic and technology combine in an epic fantasy like no other, where lost science, giant tides and jealous gods shape the fate of two worlds, and the actions of six siblings may save a universe, or damn it.

Purchase The Brass God (Gates of the World) 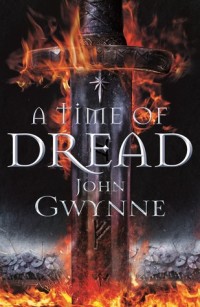 A Time of Dread

The Ben-Elim, a fierce race of warrior-angels, burst into the Banished Lands over a hundred and thirty years ago. They were in pursuit of their eternal enemy, the Kadoshim demon-horde. On that day a great battle was fought, the Ben-Elim and Kadoshim joined by allies from the races of both men and giants, and a great victory was won.

Now much of the Banished Lands is ruled by the Ben-Elim, who have made this world their home, extending their influence and power as they swallow ancient kingdoms into the protective grasp of their ever-extending borders. But peace is fragile within the realm and the Kadoshim that remain are now amassing on the edges of the empire….

Threats long in the shadows are about to strike.

Purchase A Time of Dread (Of Blood & Bone) 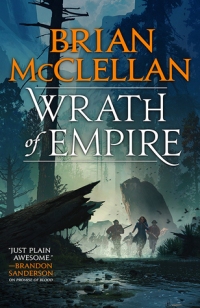 The country is in turmoil. With the capital city occupied, half a million refugees are on the march, looking for safety on the frontier, accompanied by Lady Flint’s soldiers. But escaping war is never easy, and soon the battle may find them, whether they are prepared or not.

Back in the capital, Michel Bravis smuggles even more refugees out of the city. But internal forces are working against him. With enemies on all sides, Michael may be forced to find help with the very occupiers he’s trying to undermine.

Meanwhile, Ben Styke is building his own army. He and his mad lancers are gathering every able body they can find and searching for an ancient artifact that may have the power to turn the tides of war in their favor. But what they find may not be what they’re looking for.

Purchase Wrath of Empire (Gods of Blood and Powder)

Well, those are the books I’m dying to get my hands on.  What novels are you anxiously awaiting in 2018?

9 Responses to MOST ANTICIPATED FANTASY BOOKS IN 2018