Since I pretty much hated the New 52 Lois and Clark, it didn’t take much to improve things in my eyes, but I have to say WOW! I really loved this book. The art was great. The story was fast-paced, exciting, and explosive. But, mainly, I loved it because of the characters: Lois, Clark, and their son Jon.

The core theme of Son of Superman is family. This pre-Flashpoint Clark Kent dealing with guilt and worry over danger to his family, as he comes out as the new Superman. Lois is right there beside Clark, doing what she always does be smart, tough, and kind in equal measure, fighting to keep her husband and her son safe and headed in the right direction. And son Jon is struggling to learn his new role in the family as he grows into powers he is having a hard time dealing with.

I won’t go into the specifics of the actual plot other than say it involves the Eradicator, who takes a special interest in Jonathan Kent. There are some damn fine fight scenes with Superman. There are even a few with Lois.  (If you’ve heard the old adage about not messing with a momma bear’s cubs, then you will understand what sparks Lois’ wrath.) And, yes, even young Jon gets into the mix, showing the Eradicator he did inherited both his father’s badassery and his mother’s tenaciousness. 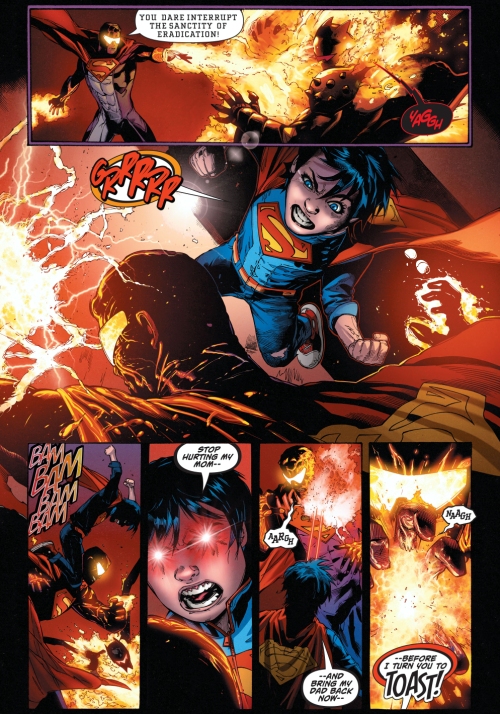 Like I said earlier, this is a damn good book. Part of that is the art and the fights, but the real key to the fun is the family element: Clark and Lois just better together. To quote a sappy 90s romcom, Lois “completes” Clark and he returns the favor. And now the real power couple is not only back together and married but raising a son who is trying to come to grip with growing powers. This allows lots of family scenes, family dynamics, where Lois and Clark are deciding what to do, how to protect their son yet help him mature into a man. These pages of non-superhero action very touching and quite memorable.  This the Superman Family I’ve always wanted to read about. 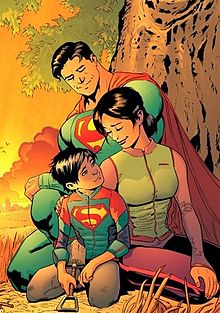 As for the new Superboy himself, Jon is a great character: a young man who has great powers and big expectations. I mean, who would want to try living up to your dad Superman’s legacy? So, Jon has his issues and his moments. He can be a naive, sweet kid one second then a whiny, petulant youth the next. He has super powers to rival most heroes, but he is still just a child whom his father wants to both shield and protect yet teach how to become a good man and a great Superboy. Jon’s struggles so realistic and touching that they are the foundations of this story, even as the title to the book proclaims. 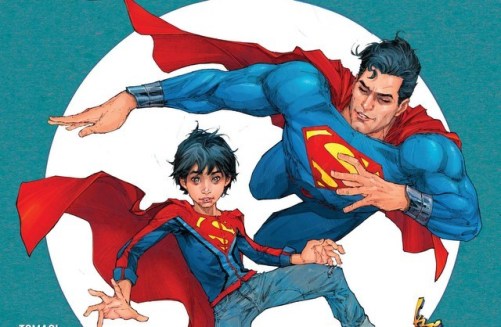 Yeah, I know some readers might not like an older, mature Superman, preferring the more youthful, New 52 version. As for me, I’m really liking this more family centered Man of Steel and definitely recommend it to other Superman fans. At least, give it a try guys. You might be like me and find yourself loving it.

1 Response to SUPERMAN: SON OF SUPERMAN