FUNDAY MONDAY, OR THE BOOKS THAT WILL HELP ME SURVIVE THE WEEK AHEAD (OCTOBER 9, 2017)

Posted on October 9, 2017 by Bookwraiths

Another week and even more books to fit into the hectic schedule. I’m finishing off a series with my first book and beginning a new one with the second. 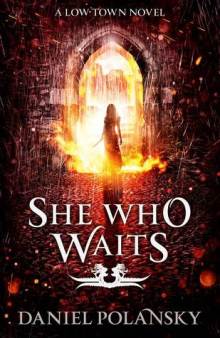 She Who Waits by  Daniel Polansky

Low Town: the worst ghetto in the worst city in the Thirteen Lands. Good only for depravity and death. And Warden, long ago a respected agent in the formidable Black House, is now the most depraved Low Town denizen of them all. As a younger man, Warden carried out more than his fair share of terrible deeds, and never as many as when he worked for the Black House. But Warden’s growing older, and the vultures are circling. Low Town is changing, faster than even he can control, and Warden knows that if he doesn’t get out soon, he may never get out at all. But Warden must finally reckon with his terrible past if he can ever hope to escape it. A hospital full of lunatics, a conspiracy against the corrupt new king, and a ghetto full of thieves and murderers stand between him and his slim hope for the future. And behind them all waits the one person whose betrayal Warden never expected. The one person who left him, broken and bitter, to become the man he is today. The one woman he ever loved. She who waits behind all things.

Children of the Fleet by Orson Scott Card

Ender Wiggin won the Third Formic war, ending the alien threat to Earth. Afterwards, all the terraformed Formic worlds were open to settlement by humans, and the International Fleet became the arm of the Ministry of Colonization, run by Hirum Graff. MinCol now runs Fleet School on the old Battle School station, and still recruits very smart kids to train as leaders of colony ships, and colonies.

Dabeet Ochoa is a very smart kid. Top of his class in every school. But he doesn’t think he has a chance at Fleet School, because he has no connections to the Fleet. That he knows of. At least until the day that Colonel Graff arrives at his school for an interview.

4 Responses to FUNDAY MONDAY, OR THE BOOKS THAT WILL HELP ME SURVIVE THE WEEK AHEAD (OCTOBER 9, 2017)