FUNDAY MONDAY, OR THE BOOKS THAT WILL HELP ME SURVIVE THE WEEK AHEAD (JUNE 19, 2017)

Summer (My kids summer vacation) is passing so quickly.  And I’m enjoying it all — including all the great books I’ve been fortunate enough to read the last few weeks.  Hopefully, this week will be no exception to that trend, adding to my winning streak! 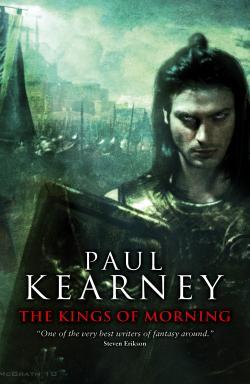 The Kings of the Morning by Paul Kearney

For the first time in recorded history, the ferocious city-states of the Macht now acknowledge a single man as their overlord. Corvus, the strange and brilliant boy-general, is now High King, having united his people in a fearsome, bloody series of battles and sieges. He is not yet thirty years old.

A generation ago, ten thousand of the Macht marched into the heart of the ancient Asurian Empire, and then fought their way back out again, passing into legend. It has been the enduring myth of Corvus’ life, for his father was one of those who undertook that march, and his most trusted general, Rictus, was leader of those ten thousand. But he intends to do more. The preparations will take years, but when they are complete, Corvus will lead an invasion the like of which the world of Kuf has never seen. Under him, the Macht will undertake nothing less than the overthrow of the entire Asurian Empire.

Dell Duval has been living on the street since his accident. He can’t remember who he was or where he came from. All he has is a tattered note in his pocket with an address for the Ellis house, a sprawling, ancient residence in Jacksonville. He takes up residence under the house in the basement unknown to the residents upstairs. He just needs time to figure out why he’s been sent here.

In the house, Lane and her son Theo have returned to the family home—their last resort after Lane’s husband cleans out her bank account and leaves. The old house is ruled by an equally ancient trio of tyrannical aunts, who want to preserve everything. Nothing should leave the house, including Lane.

Something about the house isn’t right. Things happen to the men and boys living there. There are forces at work one of which visits Theo each night—Mormama, one mama too many.

1 Response to FUNDAY MONDAY, OR THE BOOKS THAT WILL HELP ME SURVIVE THE WEEK AHEAD (JUNE 19, 2017)